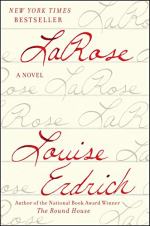 This detailed literature summary also contains Quotes and a Free Quiz on LaRose by Louise Erdrich.

NOTE: Citations in this study guide refer to the HarperCollins 2016 First Hardcover Edition of LaRose by Louise Erdrich.

LaRose is a contemporary novel of family and redemption by Louise Erdrich. The narrative, related from an omniscient third-person perspective, revolves around the intended and unwitting efforts of young LaRose Iron to heal his broken family following a tragic death. When the novel begins, LaRose’s father, Landreaux, is hunting deer on the boundary between his property and the Ravich property next door. There, Peter and his wife, Nola, the half-sister of Landreaux’s wife Emmaline, live with their children Dusty and Maggie. Dusty is best friends with LaRose. Landreaux’s older children (Josette, Snow, Hollis, and Coochy) get along well with Maggie. Landreaux discovers a deer along the edge of the property and fires, but the deer escapes. It is during this time that Landreaux realizes he has accidentally shot and killed Dusty, whom he did not see behind the deer. Landreaux is devastated, and Peter and Nola are sickened with grief.

Following Ojibwe Indian custom, Landreaux and Emmaline both decide to allow their youngest son, LaRose, to live with the Raviches. “LaRose” is the namesake of a tradition in Emmaline’s ancestry wherein the youngest child is always named LaRose to avoid bad luck and misfortune while serving as a life-saving presence in another’s life. This stretches all the way back to the 1830s. Peter and Nola quickly warm up to LaRose, though they miss Dusty terribly. At the same time, Landreaux and Emmaline miss LaRose terribly. Father Travis, the local Catholic priest, does his best to reassure Emmaline, who wants LaRose back.

The Raviches and the Irons decide to share LaRose back and forth, month by month. Meanwhile, LaRose convenes with the dead and learns from Dusty that the killing was indeed an accident. He tells LaRose to tell Landreaux that he should not blame himself. Still, Landreaux feels guilty.

LaRose and Maggie also warm up to one another, during which time Maggie confesses she fears her mother is suicidal. LaRose vows to help. He removes all poisonous and deadly things from the house, such as the bullets from Peter’s hunting rifle. When Nola learns that LaRose is communicating with Dusty on the other side, she is relieved. Her darkness fades.

While this occurs, a shifty local named Romeo is determined to prove that the killing of Dusty was not an accident in order to regain respect in the community and to get back at Landreaux for the past. Romeo is the real father of Hollis. He gave Hollis up to Emmaline and Landreaux to have a better shot at life. Romeo is in love with Emmaline. Romeo believes that Landreaux stole Emmaline away from him long ago. He also believes that his arm and leg injury, sustained during a time when he and Landreaux ran away from boarding school, are Landreaux’s fault.

Romeo obtains a copy of the coroner’s report on Dusty and invents a story wherein Dusty would not have been killed outright. Instead, he would have bled to death while Landreaux went and called for help and restrained Nola from running out to Dusty’s body. He tells this to Peter, who then asks to go hunting with Landreaux. Peter confronts Landreaux with the information about Dusty’s death, leading Landreaux to believe he will now be killed. However, the gun that Peter intends to use to kill Landreaux is empty, thanks to LaRose. Peter then realizes LaRose has inadvertently saved not only Landreaux’s life, but his as well.

When the novel ends, Hollis graduates from high school. He is preparing to go into the National Guard. Father Travis transfers because he has fallen in love with Emmaline and knows he can never have her. Josette, Snow, and Maggie have become inseparable, while the Irons and the Raviches put the past behind them and finally come together. Romeo is forgiven. He receives an invitation to Hollis’s graduation party. LaRose is happy to see both families finally come together. Hollis and Josette begin a romance.