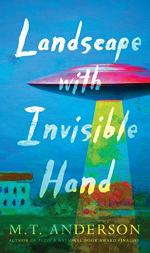 M.T. Anderson
This Study Guide consists of approximately 39 pages of chapter summaries, quotes, character analysis, themes, and more - everything you need to sharpen your knowledge of Landscape With Invisible Hand.

This detailed literature summary also contains Quotes and a Free Quiz on Landscape With Invisible Hand by M.T. Anderson.

The following version of the book was used to create this study guide: Anderson, M.T. Landscape with Invisible Hand. Candlewick Press, Somerville, Massachusetts, 2017.

Adam Costello is an 18-year-old artist who lives in America. An alien race named the vuvv have arrived and dramatically changed the Earth. The vuvv initially promised health and prosperity, but their methods created more sickness and a collapse of the middle and lower class economy. Only the very wealthy upper class is able to thrive, and they do that by aligning themselves with the vuvv, working with them or for them.

The vuvv are nothing like the traditional expectations of what aliens would be. They are short and broad, sort of like a walking coffee table. They speak with a series of grates and clicks. Mechanical translators allow humans and vuvv to communicate. When the vuvv took over control of every aspect of daily life, they made some changes to how people lived. One of those was to stop treating drinking water. The result is that many people, including Adam, have uncontrollable stomach issues. The vuvv have a cure, but Adam's family cannot afford the treatment.

At first, Adam's family escaped the hardships of the vuvv's arrival. His mother was a bank teller who held her job only for a short time. His father was a car salesman who held his job only a short while longer. After he lost his job, Adam's father walked away, leaving the family with no income and without his support. He claimed he was doing it for them, but Adam feels his father is simply a coward.

Adam's mother eventually rents out part of their house to the Marsh family – a father with his son and daughter. Adam and the daughter, Chloe, fall in love almost immediately. Like some other humans, they sell their story to the vuvv. They wear translators and sensory conductors that show the viewer exactly what they are feeling. The vuvv watch as Adam and Chloe fall in love, acting out dates and scenes that the vuvv pay to watch. When the two find they no longer even like each other, Adam struggles to keep the charade alive for the sake of the income. Chloe refuses. The vuvv announce they are suing Chloe and Adam for fraud.

Meanwhile, Adam's art teacher, Dave Reilly, enters some of Adam's artwork in a vuvv contest. He makes the first cut and attends a gala where the winner will be announced. Adam knows he has little chance of winning because he has not drawn what the vuvv want to see – still lifes. Instead, he has drawn landscapes. When the vuvv announce the winner, Adam realizes that no one cares about anyone other than the person in the spotlight at that moment, and that person is not Adam. When Adam returns home, he convinces his mother that they should simply pack what they can carry and walk away. The house is not worth the mortgage on it, and the Marshes have stopped paying their rent. Adam, Nattie, and their mother do exactly what Adam suggests. They end up in another state where both Adam and his mother land jobs. The family begins a new life in a small apartment that is quite comfortable.

More summaries and resources for teaching or studying Landscape With Invisible Hand.