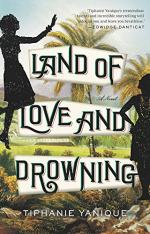 Related Topics
The Living Sea
Monster in the Middle

Tiphanie Yanique Writing Styles in Land of Love and Drowning

Tiphanie Yanique
This Study Guide consists of approximately 89 pages of chapter summaries, quotes, character analysis, themes, and more - everything you need to sharpen your knowledge of Land of Love and Drowning.

"Land of Love and Drowning" is told from the perspective of four distinct voices: Eeona Bradshaw, Anette Bradshaw, Jacob McKenzie, and an omniscient narrator.

The omniscient narrator tells most of the story in proper American English. The reader can assume it's a female, since there are a handful of times the narrator refers to herself as "we old wives." Since the story takes place in the Caribbean, and old wives tales and folklore are taken fairly seriously, the reader can put a lot of weight on the narrator's telling of the story.

Anette is the second most prominent storyteller. She tells her side of the story in the St. Thomas dialect, which when read, seems like a form of broken English. However, it should be noted, it is not broken English; it is simply the Caribbean English dialect. For example, Anette states, "But from the...

More summaries and resources for teaching or studying Land of Love and Drowning.

Land of Love and Drowning from BookRags. (c)2023 BookRags, Inc. All rights reserved.