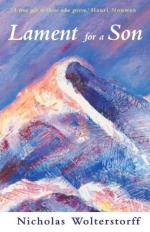 Nicholas Wolterstorff
This Study Guide consists of approximately 29 pages of chapter summaries, quotes, character analysis, themes, and more - everything you need to sharpen your knowledge of Lament for a Son.

Lament for a Son Summary & Study Guide includes comprehensive information and analysis to help you understand the book. This study guide contains the following sections:

This detailed literature summary also contains Topics for Discussion and a Free Quiz on Lament for a Son by Nicholas Wolterstorff.

Lament for a Son by Nicholas Wolterstorff is a collection of anecdotes and quotes pertaining to the author dealing with the premature death of his son, Eric, in a mountain climbing accident. The narrator compiles stories pertaining to Eric's life and death to create an inspirational story of how the narrator overcomes such tragedy through his faith in God. "Lament for a Son" is a highly inspirational book that is meant to assist others in dealing with similar tragedies.

The author writes Lament for a Son to honor his son, Eric, who dies in a mountain climbing accident. He publishes the book to give voice to others' mourning. The narrator receives a call on Sunday that Eric is dead. He has three seconds of the peace of resignation accompanied by the feeling of offering Eric to someone before the cold burning pain pervades his senses. Eric is lonely in his latter years as his friends move away and get married, but Eric is loyal, principled, gentle and loving, though he can also be severe, stern and critical. Eric's family takes him for granted, but maybe all people take each other for granted. The narrator believes that it is wrong to bury one's children because children are the future and should bury their parents.

The narrator flies across the ocean to Kufstein to claim Eric's body. The narrator wonders why Eric climbed the mountain alone, but he knows why Eric did it. Eric is writing a thesis on the origins of modern architecture causing the narrator to lament all that might have been and now never will be. Eric is cut down in the peak of his vitality, and the narrator wonders if it would be easier if his child were worn down with disease and he were able to say goodbye. Writers claim that death is the great leveler, but they neglect to mention that each death is unique. The narrator decides to ignore the societal standard prohibiting men from crying because he has been assaulted and hurt. The narrator assembles his family to tell them that Eric is dead, but they must live their lives the same as if Eric were still alive, holding Eric in remembrance. The narrator finds a list of things Eric planned to do because humanity plans. The Gospels do not console the narrator because he does not forget about resurrection; he knows Eric is in eternity, but he cannot be with Eric here and now. Some people speak wisdom while trying to comfort mourners while others say inept things, but the heart is heart, not the words; it is important to express love in the face of death.

The narrator lifts Eric from his cradle as a baby and also places Eric in his coffin. Claire, Eric's mother, insists on seeing Eric's body. Eric's funeral gives rest to the narrator's soul. The narrator composes the liturgy that is used at Eric's funeral; he objects to extinguishing the resurrection candle. The grief of Eric's death leaves the narrator at a loss for words. Because each man is part of the whole of mankind, each individual is diminished by others' deaths. Eric's story is closed and only memories are left. The narrator feels the ache of his loss deep in his soul, but Eric's death is Eric's also because of all the thing he can never again do. The narrator dreams of a sinister person frightening him and a reassuring voice comforting him. The narrator's passion for life is cooled. Books offer ways to turn from death and the pain, but the narrator will not look away because he does not believe it honors Eric's memory. Those who share grief cannot comfort one another because each individual grieves differently. Death makes Eric special among the narrator's children. The narrator imagines a battlefield where he fails to protect one of the soldiers behind him. He is pained by innocent questions about his children and can find no way to live at peace with death.

The narrator will live with his regrets and accept them as a part of life, waiting for Judgment Day to apologize to Eric. The narrator learns to spy God in the light, but he cannot find God in the darkness. He asks God to protect his family, just as he asked God to protect Eric. The narrator now comprehends the suffering of the world deeper. A bitter friend asks why he does not reject God, but the narrator sees the glory of God in the world around him. He is sure he will talk to Eric again during God's reign on Earth. God suffers with us; mourners are consoled by the tears of God. Jesus Christ hails mourners, promising that they will be comforted. God is love, and love is suffering, so God is suffering. When God's cup of suffering is full, redemption will be fulfilled. The narrator will live the reality of Eric's death, but his wounds remain. His suffering may be a blessing, but it is hard to see it as such. The narrator's family must be restructured to exist without Eric. Eric's family visits his grave one year after his death and say goodbye to Eric until they meet again in God's kingdom. Eric's parents commission Cary Ratcliff to compose a requiem in honor of Eric; the requiem addresses the awfulness of death, a lament, God's share in mankind's suffering, what Eric might say, the endurance of faith, and Christian hope.

More summaries and resources for teaching or studying Lament for a Son.

Lament for a Son from BookRags. (c)2022 BookRags, Inc. All rights reserved.