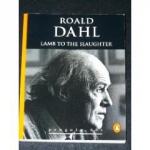 Additional Resources for Lamb to the Slaughter by Roald Dahl

Raphael, Frederic. "Stories from the Source of Heartlessness."

An assessment of Dahl's career, noting that he was a mass-market writer but comparing him to some of the finest prose stylists of the twentieth century. Raphael theorizes that Dahl's war experiences as a fighter pilot, which he wrote about in the stories collected in Over to You, are responsible for the bitterness and cruelty of much of his later fiction.

Critical study of Dahl's fiction, including a chapter on filmed adaptations of his stories.