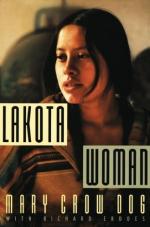 Mary Crow Dog
This Study Guide consists of approximately 31 pages of chapter summaries, quotes, character analysis, themes, and more - everything you need to sharpen your knowledge of Lakota Woman.

This detailed literature summary also contains Topics for Discussion and a Free Quiz on Lakota Woman by Mary Crow Dog.

Lakota Woman tells the life story of Mary "Brave Woman" Crow Dog. However, her story encompasses the struggle of the Sioux as they waver between embracing the white man's ways and maintaining their ancestral traditions. Mary is a half-blood, having a white father and an Indian mother, who does not feel at home with full-bloods and is not welcomed by whites. Her mother wants to be accepted by whites and live according to their rules. Mary feels ill-at-ease watching her mother try to conform to a society that does not want her. Instead Mary reaches out to her elder family members and the old traditions. As Mary searches for a place for herself in the Sioux nation, she encounters hatred, abuse, love, and finally acceptance.

After spending a summer traveling with a caravan of other Indian youth, Mary finds herself a member of the American Indian Movement. While involved with AIM she meets a man and becomes pregnant. The man abandons her and AIM, but Mary continues to attend rallies and work for the AIM cause throughout her pregnancy. Her son, Pedro, is born during a seventy-one day siege at Wounded Knee amid gunfire. Pedro's birth in the face of the siege is a victory for the Indian nation. He is born on the site of a devastating massacre a hundred years earlier and brings a new wave of warriors to the Indian rights movement.

Mary meets and eventually marries Leonard Crow Dog. Leonard is a respected Indian leader and medicine man. Her life becomes increasingly tied to the old Indian ways as Leonard teaches her how to perform sacred rituals and live as a medicine man's wife. Mary spends some time enjoying the amenities of white life as she follows Leonard around the country while he is shuffled among prisons. Mary enjoys luxuries such as running water, indoor plumbing, and fair pricing, but feels more at home on the reservation beside Leonard. Once Leonard is released from prison and the couple returns to their work as medicine people, Mary realizes that she is full-blood at heart. Mary's story traces the difficulties faced by Native Americans as the try to fit into a world where they are not wanted or exist in a lifestyle that has been taken from them. There is no resolution for Mary and as she says, "Life goes on."

More summaries and resources for teaching or studying Lakota Woman.