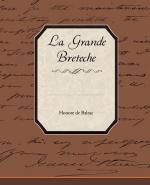 Honoré de Balzac
This Study Guide consists of approximately 46 pages of chapter summaries, quotes, character analysis, themes, and more - everything you need to sharpen your knowledge of La Grande Breteche.

Originally published in France in 1842, "La Grande Bretèche" is set in 1830 and describes events that happened in the year 1815 to 1816. This was a turbulent period in France. After the Revolution in 1789, the bourgeoisie, or middle class, struggled to consolidate its power and to retain the political and economic victories it had won over the nobility and the church. By the time of the events of the story, the reign of Napoleon Bonaparte had come and gone, but the old class divisions remained beneath the surface of a new, freer, France.

A member of this new business class himself, Balzac has been praised for his keen insight into the daily lives and inner thoughts of characters not traditionally thought worthy of literary fiction. In "La Grande Bretèche," Balzac's alter ego is the physician Dr. Bianchon. His worldly tone is perfectly suited to Balzac's purposes, and as a member of the new professional class, he blends well with members of the aristocracy (the unseen rich patient he is caring for), as well as with servants and peasants like Madame Lepas and Rosalie.

"La Grande Bretèche" is part of a group of stories called Another View of Woman in English, which is itself part of Balzac's encyclopedic work of fiction, La Comedie Humaine, or The Human Comedy. This group of stores is set at a party, after dinner, where different narrators take turns telling stories. Dr. Bianchon's contribution belongs to his "collection of appalling stories," and its gothic setting and suspenseful structure casts a spell over his listeners.

La Grande Breteche from Gale. ©2005-2006 Thomson Gale, a part of the Thomson Corporation. All rights reserved.