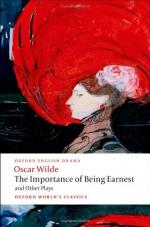 Richard Sheridan's The School for Scandal (1777) is a comedy of manners concerning a wife who nearly betrays her older husband.

Henrik Ibsen's A Doll's House (1879) depicts a mother who feels constrained and unhappy in her limited role. As a result, she leaves her husband and children.

Mrs. Warren's Profession (1898), written by George Bernard Shaw, views the theme of the wayward mother with marked parallels to Wilde'splay.

A play by Moises Kaufman about Wilde's trial for homosexuality, Gross Indecencies: The Three Trials of Oscar Wilde, offers insights into Wilde and the social world of Victorian London.