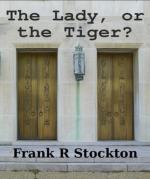 Compare & Contrast The Lady, or the Tiger? by Frank R. Stockton

1881: Animals are not protected from human exploitation. P. T. Barnum and his partner, Jarnes Bailey, form the Barnum & Bailey Circus, whose main attraction is Jumbo, an African elephant they bought in London. Their traveling show delights thousands across the United States.

1990s: Tigers and other animals are protected as endangered species. Tigers are frequently raised in captivity and live in zoos or are trained as circus animals. Several breeds of tigers became extinct during the twentieth century. By 1996, there are only twenty to thirty remaining South China tigers.

1880s: Capital punishment is practiced throughout the world and in the United States, though

public executions are not as common as they once were. However, some efforts to abolish the death penalty have succeeded. By the 1880s, the state of Michigan and the countries of Venezuela and Portugal have outlawed capital punishment.