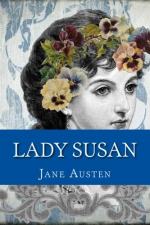 Jane Austen
This Study Guide consists of approximately 36 pages of chapter summaries, quotes, character analysis, themes, and more - everything you need to sharpen your knowledge of Lady Susan.

The following version of this book was used to create this study guide: Austen, Jane. The Complete Novels with Introduction by Karen Joy Fowler. Penguin Classics Deluxe Edition, 2006.

Lady Susan is an epistolary novel by Jane Austen, telling the story of an unscrupulous widow who manipulates her family and acquaintances for her own social survival. The novel takes place over the course of several months.

After the death of her husband, Lady Susan writes to her ex-brother-in-law, Mr. Vernon, and warmly informs him she wishes to visit his estate Churchill to meet her nieces and nephews. Mrs. Vernon knows that Lady Susan has a scandalous reputation for seducing the men away from her last hostess, Mrs. Manwaring. The Vernons are powerless to stop her from coming because of social etiquette and Lady Susan moves in. Lady Susan writes to her friend Mrs. Johnson about how much she detests the Vernons and that she's only using them. She soon sets her sights on Mrs. Vernon's brother, Reginald De Courcy, for the simple reason he has been warned to stay from her and she enjoys the ego boost of taming a man predisposed to dislike her. Lady Susan's extreme beauty and conniving tactics win Reginald away from his sister. Mrs. Vernon fears he will end up marrying Lady Susan and that she's after his fortune. Reginald grills Lady Susan about all the negative rumors he heard about her, but she convinces him they are all untrue. The De Courcys write to their son begging him not to marry Lady Susan. He insists they are only friends while he continues to fall infatuated with her. Lady Susan writes to her friend, Mrs. Johnson, telling her how much she despises Reginald because he is so naive. Lady Susan continues to flirt with the idea of marrying Mr. Manwaring if his marriage implodes after all her efforts.

Lady Susan plans to marry her daughter Frederica to Sir James, a man Lady Susan also seduced away from the younger Miss Manwaring. Not wanting to marry Sir James, Frederica runs away from boarding school and ends up living with the Vernons in Churchill. The Vernons are prepared to dislike Frederica because of her mother, but Frederica turns out to be a gentle and kindhearted young girl who has not been shown any true affection. Mrs. Vernon becomes a mother figure to Frederica. Reginald continues to hate Frederica as he is still under Lady Susan's thumb. Lady Susan plans to still force Frederica to marry Sir James and threatens her not to reveal the truth to the Vernons. When Sir James makes a surprise appearance to Churchill, Frederica confesses the truth to Reginald. Reginald confronts Lady Susan in a furor, finally seeing her for the manipulator she is. The Vernons celebrate Lady Susan's defeat- until Lady Susan convinces Reginald everything was a misunderstanding.

Lady Susan travels to London to meet with Mrs. Johnson and Mr. Manwaring. To her annoyance, a lovesick Reginald follows her to London although she tried to get rid of him. While Lady Susan courts Mr. Manwaring in private, Reginald learns the truth about Lady Susan from Mrs. Manwaring. He cuts off Lady Susan for good. Mrs. Vernon endeavors to set up Reginald and Frederica, but her plan is foiled when Lady Susan retrieves Frederica and brings her to London. She intends to follow through with her plan and force her daughter to marry Sir James against her will. The novel ends in an epilogue describing how Mrs. Vernon traveled to London and won Frederica back from Lady Susan owing to the fear of an influenza epidemic. Lady Susan marries Sir James herself. An unnamed narrator muses on whether or not she's truly happy. It is also implied Frederica and Reginald fall in love.

More summaries and resources for teaching or studying Lady Susan.