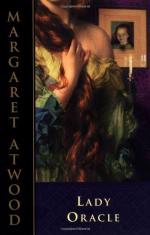 The novel begins with Joan in Terremoto, Italy after she has faked her own death in Lake Ontario. She flees to Terremoto after going through with a complicated plan to extricate herself from her current life in Toronto. Joan believes that in killing herself, her old self, she will be able to finally live an honest and true life. But she never gets the chance to experience this. She is only in Terremoto a week before her friends who helped her follow through with the plan of her fake drowning are put in jail, accused of knocking her out of the boat and letting her drown. In Terremoto, Joan reflects on her childhood, her marriage to Arthur, and trysts with the other men in her life. Throughout her time in Terremoto she conceals her identity from the locals by dying her hair and covering her face with scarves and large sunglasses, fearful that someone is after her.

As Joan reflects back, she is haunted by memories of her overweight childhood. She ate to anger her mother, who was a rigid and cold woman. Joan’s beloved aunt dies and leaves her an inheritance, but Joan is only allowed the money after losing 100 pounds. She does this and flees her parents’ home to London, England.

In London, she briefly lives with a man she refers to as the Polish Count. She meets the Count after falling off of a red double-decker bus. He helps her ice her swollen ankle. Even though she doesn’t love the count, she tries to convince herself she does and lives as his mistress for a few months. The Polish Count is a banker as well as a writer of nurse fantasy novels. While living with the Count, Joan becomes enamored with English history and begins writing Costume Gothics for the same publisher as the Count. She writes under her dead aunt’s name in hopes that her parents, namely her mother, won’t find her. Eventually she tires of the Count, and meets a political ban-the-bomber named Arthur.

She lives with Arthur in London for a few months and returns home after her father notifies her that her mother has died. She goes home to validate that her mother is really dead and stays in Toronto because she cannot afford a ticket back to London and Arthur. She rents a room in Toronto and continues to write Costume Gothics. Months after arriving back in Toronto, Arthur shows up at her door. She thinks that this is a romantic gesture but then realizes that he returned to Toronto to go to school because he is out of money—not for her. She never tells Arthur of her second identity as Louisa K. and the novel writing. Arthur is a radical liberal and Joan fears that he would look down on her if he knew what she did. She becomes the best of what she thinks Arthur wants—a wife who cooks and cleans and supports her husband. When he is gone, she writes.

Her fantasy novels’ characters are all reminiscent of people from Joan’s life, including her. Throughout the book, Atwood includes excerpts of the Costume Gothics on which Joan is working. After living with Arthur and hiding her work, she becomes stuck in her character’s plot. Her normal writing techniques aren’t working, so she tries Automatic Writing. She first learned about Automatic Writing at a Spiritualist meeting she attended with her aunt when she was a teenager. She hypnotizes herself every evening for a matter of weeks and ends up writing a collection of poems, but with no recollection of doing so. On a whim, she sends the collection out to publishers.

Her book is published and becomes a bestseller. Joan dislikes her publishing persona and the feeling that she is always being watched. She botches a few interviews, actually telling the interviewers that she wrote the book through Automatic Writing. She is then heralded as a gothic figure herself. She becomes bored in her marriage to Arthur, who is working as a teacher and writer for a political magazine, and has an affair with an eccentric man named the Royal Porcupine. A man named Fraser Buchanan tries to blackmail her by threatening to tell her husband about the Royal Porcupine; Joan breaks it off with the Royal Porcupine who then suggests a double suicide. Shortly after their breakup, someone begins leaving dead animals and threatening letters on her doorstep. Joan fears that it is Arthur and that he knows about her affair. It is at this point that she decides to fake her death via drowning and create a new life for herself somewhere else under her pseudonym Louisa K. Delacourt.