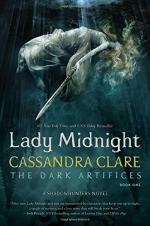 Cassandra Clare
This Study Guide consists of approximately 79 pages of chapter summaries, quotes, character analysis, themes, and more - everything you need to sharpen your knowledge of Lady Midnight.

This detailed literature summary also contains Quotes and a Free Quiz on Lady Midnight (The Dark Artifices) by Cassandra Clare.

Emma Carstairs and Julian Blackthorn are Shadowhunters, people who enforce rules for an array of magical people and creatures while protecting ordinary people. They are also parabatai, partners bound by magic, who are falling in love as they reach adulthood and maturity. They are living with the memories of a war and fear being separated from each other and from Julian's siblings, who depend on him for every aspect of their lives. Julian and Emma are beginning to feel a romantic connection though it is forbidden by their parabatai relationship. They fight the feelings to a degree, knowing the Shadowhunters' governing body – the Clave – enforces the rule ruthlessly. They begin to give in to their feelings, wondering if they can find a way to skirt the law. Emma soon realizes the magical runes they use on each other are more powerful than they should be. She eventually discovers that parabatai who truly love each other become all-powerful, and that power can cause the downfall of the couple in love and the ill-effects reach the entire family. With that knowledge, Emma sets out to make Julian believe she is falling in love with Julian's brother, Mark.

Everyday life for Julian and Emma takes place at the Los Angeles Institute. As far as the Clave knows, Julian's Uncle Arthur is in charge, but Arthur has some form of dementia and has barely functioned for years. Julian has handled the day-to-day business, in addition to caring for his four younger siblings, worrying about his two half-siblings who are part Faerie and have been essentially exiled.

Meanwhile, the Shadowhunters learn there have been a series of murders and that mundanes – ordinary mortals – are being killed along with faeries. A delegation of faeries arrive at the Institute where Emma and Julian live, pretending to ask for help solving the murders. They had taken Julian's half-brother, Mark, to live with them years earlier. Mark, who is half-faerie, is like a feral child when he arrives but soon begins to forge connections with his half-siblings, Julian, Ty, Livvy, Dru, and Tavvy. The faeries promise that Mark can choose whether to remain with his family or return to the faeries once Julian and Emma have solved the murders. The Clave would normally offer assistance with an operation of this size, but Julian fears calling on them because of a law that prevents Shadowhunters from helping faeries.

Through a series of clues, Emma and the others learn that the faeries are actually in league with Malcolm, the high wizard of Los Angeles, who has pretended to be their friend. In actuality, Malcolm has spent years figuring out how to resurrect the woman he loved, Annabel, through necromancy. The final step requires the blood of a Blackthorn, and Malcolm plans to kill Tavvy. Emma and the others stop him and believe they have put a stop to Annabel's return, but while they are going forward with their lives, Annabel stirs in her coffin.

More summaries and resources for teaching or studying Lady Midnight (The Dark Artifices).