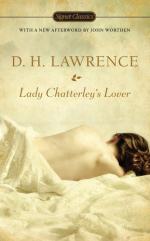 D.H. Lawrence wrote the novel Lady Chatterley's Lover in 1920. Because of the controversy surrounding its publication, the book underwent several printings and was finally privately published in Florence in 1928. It was Lawrence's final novel. It tells the story of Clifford and Connie Chatterley and their sterile marriage, which ultimately leads her to have an affair with their gamekeeper, Mellors.

The story takes place after the First World War and is set in England, in the heart of the industrialized Midlands. Sir Clifford Chatterley has returned to England paralyzed from the war. He and his wife, Lady Constance, move to their home at Wragby Hall to begin their married life together. Connie finds Wragby cold and dank. She feels that the staff is archaic with their clockwork schedules and formal, unchanging attitudes. She is equally uncomfortable with the village of Tevershall because she finds the villagers ill mannered and aloof. Eventually, she and Clifford ignore the locals altogether and become self-contained in their own small world at Wragby.

Connie becomes increasingly restless at Wragby. Her father suggests that she find herself a lover. Clifford is constantly inviting guests to their home, and among them is a young Irish playwright named Michaelis. Constance gets to know him and feels an affinity for the melancholy young man. They become lovers. Despite their initial intimacy, Connie retains her sense of detachment. She ultimately ends the affair some months later.

One day during a walk in the woods, Clifford tells Connie that he wouldn't mind her talking a lover so that he could have an heir. His sole condition is that she must stay with him so that they can retain the intellectual intimacy that they currently share. Suddenly, Connie begins to wonder if she can continue to live the isolated life she has with Clifford at Wragby.

Connie meets Mellors, Clifford's gamekeeper. She recognizes that there is something almost gentlemanly about him and is intrigued about his past. She asks Mellors to make her a spare key to the pheasant hut so that she can go there alone as she pleases. Connie begins to go there each day to escape the confines of Wragby. One afternoon, she encounters Mellors there. Overcome by emotion at the sight of the baby chicks, she allows him to take her into the hut. She lets him comfort her, and they make love.

Clifford and Connie continue to grow apart, and eventually on the advice of her doctor, Connie hires a nurse from Tevershall to help take care of Clifford. Mrs. Bolton, a retired nurse, comes to stay at Wragby. Gradually, Clifford becomes increasingly dependent upon her. This allows Connie more time to continue her affair with Mellors, whom she hopes will give her a child.

Connie arranges a trip to Venice with her father and sister. While she is away, Mellors' estranged wife returns to the cottage and discovers his affair. She spreads rumors around the village, which ultimately results in Clifford relieving Mellors of his position as gamekeeper. Mellors writes to Connie in Venice that he is moving to London.

Connie leaves Venice and meets Mellors in London, where she tells him that she is expecting their child. They decide they must pretend that Duncan Forbes is the father to prevent further scandal. When Connie goes to Clifford to ask for a divorce, however, he does not believe that she loves Duncan. Under pressure, Connie admits that Mellors is her true love. Clifford refuses to divorce her, and she leaves Wragby for Scotland with her sister.

Mellors gets work on a farm in the Midlands, and the novel ends with a letter from him to Connie. In the letter, he is full of hope for their future together. He is optimistic that he will obtain a divorce from Bertha and that when their baby is born they will have their own farm.