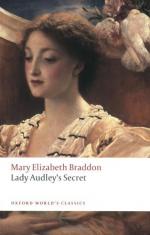 The book, Lady Audley's Secret, by Mary Elizabeth Braddon is a story written by a woman in Victorian England and published in 1861 - 1862, about a woman who has a huge secret. Lady Audley is living the life of absolute luxury, married to a very wealthy man more than twice her years which seems to be a small price to pay for her new position in life. Just a few short weeks before the opening of the novel, Lady Audley was Lucy Graham, governess to two girls in a neighboring house. Her accomplishments in music and art simply cannot hold a candle to her exquisite beauty and effervescent charm. As soon as Sir Michael Audley meets Lucy, he knows he is in love with her. His daughter, Alicia, is nearly the same age as Lucy, and yet that does not stop the man from proposing.

Having reached the status of Lady Audley, the woman will do whatever it takes to maintain her position. A surprise visit from her husband's nephew strikes a note of discord in her life, for he brings with him one George Talboys. George, having recently lost his wife, is in mourning and takes no notice of the enchanting mistress of Audley. However, the mistress of Audley takes great notice of George, as he is her first husband. She moved on with her life, believing that her husband deserted her and died in the gold fields of Australia. Just as she achieves a life of perfection, the husband she once loved and had a child by, now reappears. Lady Audley will not allow this minor ripple to change her life.

Working with intense thought and devious intent, Lady Audley works through the possible contingencies and manages to list herself as having died, having first found a woman who resembles her in age and appearance. Once that woman dies, she posts an ad in "The Times" of the death of one Helen Talboys, as she was once known. She leaves her son with her father, a drunken old man who only wants to know from where his next bottle will come. She makes the mistake of holding on to a couple of keepsakes that make her the target of extortion through her maid and eventually her maid's husband. In order to keep her secret, she must give them money time and again.

Through all this, Lady Audley keeps up the appearance of being the most charming creature of all God's creation; able to twist those she needs to around her finger. Her husband, Sir Michael, is the most susceptible to her charms, for he believes he has found a second youth in his young wife and will hear nothing to her discredit. Lady Audley even goes so far as to claim that her husband's nephew is mad with the grief at his friend's disappearance in order to maintain her position as Lady Audley. What she does not consider is the determination of Robert Audley in avenging his friend's death. In order to keep his own sanity and to answer to his friend's sister, Robert continues to investigate the trail of one Lucy Graham and discovers that she is, indeed, Helen Talboys, wife to his dear friend, George.

Lady Audley stops at nothing. She sets fire to an inn so Robert will die in the fire and leave her in peace. Her plan does not come to fruition as Robert survives the fire and manages to save Luke Marks from immediate death in the conflagration. His testimony on his deathbed gives Robert the last bit of information he needs in order to finally confront Lady Audley and force her to reveal her sordid story to her infatuated husband. After this confrontation, Sir Michael and his daughter leave England with instructions for Robert to do whatever is necessary to the woman he once believed to be his wife. Lady Audley spends the rest of her days in an insane asylum just as her mother had done, allowing Robert, Clara, Alicia, George, and Georgie to live their lives in peace and bliss.