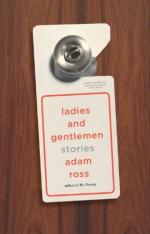 Adam Ross
This Study Guide consists of approximately 33 pages of chapter summaries, quotes, character analysis, themes, and more - everything you need to sharpen your knowledge of Ladies and Gentlemen.

This detailed literature summary also contains Topics for Discussion and a Free Quiz on Ladies and Gentlemen by Adam Ross.

David Applelow is a man in his early forties who has spent most of his adult life moving from one job to another, each different from the one before. Applelow never finished college, never attempted to become a professional at a specific career. Instead, Applelow has allowed his life to float along on a current only he can sense. This unanchored life continues even now as Applelow fights to find a job after the theater group for which he worked as manager closed as the recession began to impact the group's founder.

Applelow goes to an interview for a job he read about in the newspaper. The advertisement for the job was vague, but Applelow believes it is a sales job and that his eclectic professional history will make him perfect for the job. Unfortunately, Applelow puts everything into getting this one job, even cancelling interviews with other companies and avoiding putting in applications elsewhere while he waits for word on this one job. When it turns out the job was a joke for a reality television show, Applelow suddenly realizes he has put all his eggs into a vanishing basket.

As Applelow tackles his unemployment problems, he meets his neighbor's son. Zach is as unanchored as Applelow, going wherever the urge pushes him. Zach is supposed to be in college, but he has told his mother he plans to go into the Air Force. However, Zach has not signed up for the Air Force, he has simply decided he no longer wants to go to school. In fact, Zach is considering going to California even though he has no plan, no job. Applelow recognizes in Zach the same indifference to life he had as a young man and tries to council Zach against it, but instead Zach steals the last of Applelow's money and runs off to California.

Roddy Thaneappears in The Rest of It

Roddy Thane is an English professor at Hollins University. Thane is divorced, but he misses his ex-wife desperately and thinks about her almost constantly. Thane allows thoughts of his ex-wife to dictate just about everything he does, including where he lives, who he dates, and what projects he does for work. Thane is a desperately lonely man who cannot fully appreciate what life has in store for him without his wife. Not only this, but Thane cannot accept that his wife is gone permanently even though he knows that she is married and has two children with her new husband. For this reason, Thane possibly places himself in danger at the end of the story to prove he is not a coward.

Mike Donatoappears in The Rest of It

Mike Donato is a janitor at Hollins University. Donato has lived an exciting life and likes to share his stories of this life with Thane. In fact, as the novel begins Donato tells Thane the story of how he discovered a mass murder while transporting large amounts of cocaine on a boat. Thane is so impressed with Donato's stories, even as he doubts their veracity, that he offers to compile them into a book. Donato is so excited with this idea that he rushes to Thane's office on Monday to tell him how he has been harboring his cousin all weekend even as the police search for the cousin on suspicion of murder.

Griffinappears in The Suicide Room

Griffin is the first person narrator of The Suicide Room. Griffin is a college student in the eighties as the story begins, but as narrator he makes it clear to the reader that he is looking back on something that happened in the distant past. Griffin's tale is filled with stories of death. As a young man, this seems an antithesis to Griffin's current location and age. However, death continues to be a theme of the story as Griffin continues. Not only literal death, as in the death of the girl in 9E and Will's death, but also the death of the relationships that Griffin is in as the story unfolds. Griffin is involved with Alyssa because he desired to possess the most desired girl at school, but when she admits her love to him Griffin no longer wants her. Griffin is also involved with Casey, Will's girlfriend, a relationship that may have directly led to Will's death. The reader is unsure if Griffin learned anything from the experience of seeing Will die, but he does admit that it was a defining moment in his life suggesting that perhaps it changed everything in Griffin's life.

Caseyappears in The Suicide Room

Casey is Will's girlfriend in The Suicide Room. Casey is a troubled young girl whom the reader initially sees as a gentle, kind girl but quickly learns that she has a lack of morals and a temper. It is rumored that Casey once hit Will on the head because of a rumor that he had cheated on her. Then the reader learns that Casey has been sleeping with Griffin for some time. However, Casey clearly continues to love Will despite whatever tensions have caused her to turn to Griffin. Casey becomes jealous when Will openly flirts with Alyssa and worries for him when Will begins his trip around the outer edge of the dorm building. Casey is a complicated girl who becomes something of a serial cheater, ruining her future marriage by cheating on her husband with a business associate of his.

Willappears in The Suicide Room

Will is a college student in The Suicide Room. Will is in a contest with another college student to see who can pull the most outrageous prank or stunt. It is Will's turn as the story unfolds. Will threatens to commit suicide as his prank, but then decides that he will only walk around the ninth floor of the dorm building on the two inch ledge. Will nearly makes his goal, but falls after seeing his girlfriend in the arms of his friend. Will falls, but the reader does not know if he fell on purpose, if he tripped, or if he was pushed. The reader, however, is left with the impression that Will knew his girlfriend was untrue to him and that the stunt might have been a way of getting attention, not to commit suicide. However, it is possible Will committed suicide in the most dramatic way he could.

Lisaappears in In The Basement

Lisa is an intelligent woman who was once a college roommate of Maria's, a character in In the Basement. Lisa could have chosen almost any career and done anything she wanted, but Lisa had a problem focusing and sticking with a single project. In the end, Lisa marries a man who is destined to be untrue to her and to have two children whom she is too rich to have to raise on her own. Lisa buys a dog with the intention of training it herself, but ends up locking the dog up in the basement every day because she is not patient enough to teach it not to use the bathroom in the house. Lisa and her dog are symbolic of Nicholas' inability to finish his dissertation and the narrator's inability to finish his novel, although these characters make fun of Lisa and show outrage at what she has done to the dog.

Calebappears in When in Rome

Caleb is a lawyer with a younger brother, Kevin, who is always in some kind of trouble. Caleb and Kevin had a falling out when Kevin nearly caused Caleb to be arrested for cocaine possession, causing them to not speak for several years. However, when their parents died, Caleb and Kevin reached out to one another, building something of a relationship again. Caleb wants to have a relationship with his brother and he wants to help him when he is in trouble, but Kevin makes it difficult. When Kevin does ask for help, Caleb suffers a broken nose in a mugging and learns that the mugging was a setup on his brother's part in order to steal fifty-thousand dollars from his employer. Caleb turns the other cheek this time, but the reader is left with the impression that this is the only time Kevin will take advantage of Caleb in such a way.

Joshua is a young actor who began private school in 1980 as a thirteen-year old-seventh grader. Joshua works as an actor and it is this that has paid for his schooling. At his new school, Joshua meets two young men with whom he becomes good friends. One friend, Abe Herman, teaches Joshua about Judaism. Joshua's father is Jewish, but he does not practice his faith and has not taught his children about it. For this reason, Joshua learns everything he knows about the religion from Abe and his family. At the same time, Joshua befriends Kyle Duckworth whose family teaches him about manhood and romance. Joshua falls for Kyle's older sister, Elsa, and spends a great deal of the story using his connections in the entertainment industry trying to seduce her. In the end, Joshua gets what he wanted, learning that commitment to a goal can help him reach that goal.

Saraappears in Ladies and Gentlemen

Sara is a middle aged woman who has always regretted not sleeping with a specific man in college. For this reason, Sara quickly commits to an adulterous rendezvous with this man when she runs into him years later. However, after speaking to a man on the airplane, Sara finds herself wondering which regrets will plague her more, cheating on her husband or not having taken the chance to consummate a love affair with her old college crush. The reader never learns her decision, but realizes that whichever choice she makes will change her life irrevocably.

More summaries and resources for teaching or studying Ladies and Gentlemen.