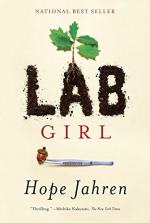 Jahren and Bill put together their first lab together shortly after Jahren finished her graduate degree, and they put together others over the years. The lab at Johns Hopkins was important to Jahren because she went there to help cope with the emotional terror during her pregnancy. She was devastated when a department head said she could not be there at all until her medical leave was over.

Jahren's father was a teacher at a community college in Minnesota, the town where Jahren grew up. Jahren and her brothers spent a lot of time in their father's lab and Jahren described the things she learned there, including how to take things apart while they were still working so that she could fix them when they broken down. These early years of working in the lab was one of the main catalysts for her...