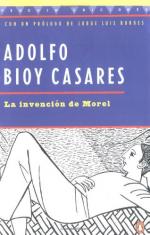 The story of the novella, "The Invention of Morel" begins with an unnamed man on a rugged island in the middle of the ocean. Throughout the story, the man remains unidentified. However, the reader learns that he is a fugitive from justice. The man writes a diary of his experiences that he will use it as a basis for book if he is able to return to civilization. Since there are so many intrinsic dangers on the island, the purpose of his daily log has another purpose: it may be his will.

It is never revealed what the man is accused of but he claims in his diary that he is innocent. The country that is pursuing him is Venezuela, the place of his birth. When the man runs into an Italian rug merchant in Calcutta, he learns of Villings Island. The merchant tells him that the island was mysteriously abandoned by its inhabitants after they constructed several large buildings on the land. The merchant warns the man that the island has many dangers including a dreadful disease that if contracted promises certain death. It is so deadly that not even pirates will come ashore. The man so fears prosecution and false imprisonment that he decides to take the risk. He travels over rough seas in a row boat to Villings Island.

The man feels safe from capture and is surviving on the rugged island in solitude. Stunningly, his sanctuary is intruded upon one day when he hears music and sees people dancing near the main building called the Museum. The same two songs play over and over again. Fearing that the people are part of a scheme to capture him, the man stays hidden from them. The man notices a young woman who sits on the rocks on the beach everyday at sunset. He is drawn to her and begins to have feelings for her. The man becomes brave and comes out of hiding, sitting near her on the beach. However, she seems not to see him. The woman is seen several times with an odd-looking man wearing tennis garb. He overhears their conversation—the man calls the woman Faustine and the odd-looking man is named Morel. The protagonist is resentful of Faustine spending time with the man. He notices that they seem to repeat interactions on occasions—having the same movements and conversations. None of the people he encounters can see or hear him. The man begins to believe that the people do not exist and that he is having hallucinations or that the people are aliens or ghosts.

The man overhears a meeting that Morel, a scientist, is having with all the people. He tells them that they were unknowing participants in an experiment he conducted. The people are all images created by his invention. The invention is based on the technology of photography, television, movies, the radio, the phonograph and the telephone. His invention at first would only provide one element of a person; for example, the aroma of a person's scent or the feel of a person's skin. However, after synchronizing all his dials and controls he was able to produce the complete image of the person along with his soul. The images are captured in scenes containing actions and conversations that will be projected over and over again throughout eternity. Each time scenes are repeated the images will see them as new since they will have no memory of the other times.

The protagonist now knows why the images cannot see or hear him. He decides to try to understand how the mechanism of the invention works. The motor that powers the projection of the images depends on the high tides of the island. When the images disappear the man steals himself to the basement where he observed the motors once before. He enters through a hole in the wall he made on his first visit. The tides rise and the motors start up. He examines the motors but cannot figure out how they operate. When he tries to leave, the hole is gone and the wall is solid. The image of the solid wall is being projected and he cannot break a hole through it. He fears he is trapped and will die in the motor room.

The man is able to escape and finds the receivers and projectors that are part of Morel's invention. He cannot bear the thought of living without Faustine's image. If the machines break down, he will lose her. He decides to photograph himself for seven days and superimpose his image side by side with Faustine in the scenes containing her image. He knows he will die when the process is complete but he will be with her for eternity. He pleads that anyone finding his diary who can invent a machine capable of assembling disjointed presences try to locate Faustine and him and allow him to enter her consciousness.