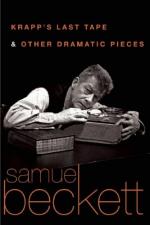 Samuel Beckett
This Study Guide consists of approximately 43 pages of chapter summaries, quotes, character analysis, themes, and more - everything you need to sharpen your knowledge of Krapp's Last Tape.

Waiting for Godot, Beckett's 1952 play, is his most famous and widely-studied work. Its minimalist plot concerns two tramps who wait in an unnamed place for an appointment with Godot a mysterious figure who never appears but who always promises to arrive the following day.

Like Krapp's Last Tape, Beckett's 1957 play Endgame explores the effects of isolation and the human tendency to impose order on a completely chaotic world.

Beckett's trilogy of novels, Molly, Malone Dies, and The Unnamable (1959) are considered his greatest achievement in prose. The novels explore many of the themes found in Krapp's Last Tape, such as loneliness, isolation, and the creation of identity.

James Joyce's novel A Portrait of the Artist as a Young Man (1916) follows the exploits and artistic awakening of Stephen Dedalus, Joyce's autobiographical counterpart. Like Krapp, Stephen is often convinced that he is destined...

Krapp's Last Tape from Gale. ©2005-2006 Thomson Gale, a part of the Thomson Corporation. All rights reserved.