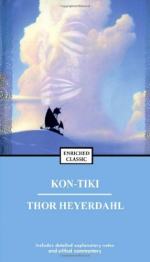 Kon-Tiki: Across the Pacific by Raft Summary & Study Guide

Thor Heyerdahl
This Study Guide consists of approximately 44 pages of chapter summaries, quotes, character analysis, themes, and more - everything you need to sharpen your knowledge of Kon-Tiki.

Kon-Tiki: Across the Pacific by Raft Summary & Study Guide Description

Kon-Tiki: Across the Pacific by Raft Summary & Study Guide includes comprehensive information and analysis to help you understand the book. This study guide contains the following sections:

This detailed literature summary also contains Topics for Discussion and a Free Quiz on Kon-Tiki: Across the Pacific by Raft by Thor Heyerdahl.

Thor Heyerdahl, a Norwegian zoologist, explains how he develops a theory on how the Pacific islands were originally settled from South America. While on a zoological expedition with his wife to the island of Fatu Hiva, they discuss the constant trade winds that blow from east to west, Thor's first piece of the puzzle. Had people from South America, 4,000 nautical miles away, taken advantage of the trade winds at some remote time in the past?

After writing a full presentation of his hypothesis, Thor tries to bring it forward in New York City, where his ideas are rejected without examination by the scientific community. Thor has committed the cardinal sin of stepping out of his area of specialization. One of his critics snidely suggests that if Thor thinks South Americans sailed to Polynesia on rafts, he should try to do the same. Thor decides that this is a fine idea and pursues it.

Through determination and his natural skills with people, Thor finds the financial and official backing for his adventure. He meets his first crewmember, Herman Watzinger, while in New York City. By letter, he invites Knut Haugland, Erik Hesselberg and Torstein Raaby to join, and they all accept. A sixth crewmember, Bengt Danielsson, joins as the raft is being built in Peru.

Problems arise all along Thor's quest to build the raft. The financial backing falters. Governments demand much paperwork and are sometimes reluctant to help. The necessary green balsa logs are not accessible during the rainy season. Working as a team with Herman, Thor breaks through all the roadblocks and succeeds in building the raft, christened the Kon-Tiki, and launching it within his time window.

The voyage starts out rough as the landlubbers learn how to handle the raft in high seas. A few days later, the weather calms down and they proceed onward at a good clip. The crewmembers discover that the ocean is full of fish and strange creatures, one of them a whale shark that comes to visit. While passing by the Galapagos Islands, the ocean currents threaten to take them off course, but favorable winds and currents bring them back. Herman falls overboard and is nearly lost at sea, being as the raft cannot be stopped or turned back. Quick action of the crew saves his life.

As they approach the South Sea Islands, two storms damage the raft, but not enough to put it out of commission. The easterly wind threatens to run the raft into dangerous coral reefs. The crew fights hard to change course. Fortunately, a wind from the north comes up, and they make it around the reefs.

The first Polynesian island they encounter proves impossible to land upon due to strong currents and winds. The second island seems a better candidate, but is surrounded by an impassible coral reef. The natives of the island try to tow the raft through a small break in the reef, but the raft is too heavy and the current too strong. The third island becomes the crew's landing spot. The ocean pushes the raft into a reef, damaging it somewhat, but all make the landing safely.

The crew sets up camp and tries to revive their radio. They succeed in doing this and make contact with Hal in Los Angeles, a ham operator who had been receiving broadcasts from the raft through most of its voyage. Natives from the nearby island of Raroia come to visit and invite the crew to their village for festivities of honor. The crew celebrates with the villagers until a schooner from Tahiti comes to pick them up and tow the raft into harbor.

The crew enjoys more festivities on Tahiti. A Norwegian cargo ship picks up the crew and raft. Their adventure over, Thor and the crew return to civilization triumphantly successful in their daring voyage across the Pacific on a raft of ancient design.

More summaries and resources for teaching or studying Kon-Tiki: Across the Pacific by Raft.

Kon-Tiki: Across the Pacific by Raft from BookRags. (c)2022 BookRags, Inc. All rights reserved.