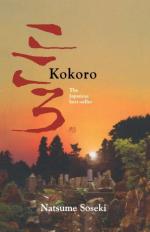 Natsume Sōseki
This Study Guide consists of approximately 42 pages of chapter summaries, quotes, character analysis, themes, and more - everything you need to sharpen your knowledge of Kokoro.

This detailed literature summary also contains Topics for Discussion and a Free Quiz on Kokoro by Natsume Sōseki.

Kokoro is a story of one young man searching to fill a void in his life. It is the story of many individuals who long to appease loneliness, and the story of two men who attempt to assuage loneliness through love but only find peace in death. Soseki befriends an older man he calls "Sensei" with the expectation of learning about life. What Soseki does learn is that Sensei is a troubled and reclusive man who does not trust himself or humanity enough to interact with the world. Though Soseki and Sensei develop a close friendship, Sensei's life remains a mystery. Only when Sensei decides to end his life does he decide it is time to pass on his testament. Kokoro is a tale that gets to the heart of the loneliness, fear, and guilt that accompanies love, individuality, and betrayal.

Soseki is a young man bored with life when he befriends Sensei. Sensei believes Soseki has sought him out because he is lonely, but himself unworthy of society and unable to help the younger man. Often Soseki is confused and disappointed by Sensei's words and believes the older man's perceptions of him incorrect. Soseki learns more about Sensei through his wife, Shizu and his knowledge and feelings for her grow as well. Shizu explains to Soseki that a friend's unnatural death coincided with the slow descent Sensei has taken into isolation. Shizu loves her husband, but Sensei hides what torments him and has spent their wedded life just outside of her emotional reach. Soseki also feels that Sensei has erected a wall between them and one day confronts Sensei with his suspicions. Sensei is unsure he can trust Soseki, but the younger man assures him he is a true friend. Sensei acquiesces saying he will tell his life story when the time is right.

When Soseki is home with his parents he is initially happy to be with them. Soon however, he is bored of the country and finds himself continually comparing his father unfavorably with Sensei. When Soseki arrives home after graduation to find his father actively working in the garden, he is haunted by Sensei's and Shizu's words of caution and is filled with worry. Shortly after Emperor Meiji falls ill, Soseki's father's illness takes a turn for the worse. When he begins suffering fainting spells and nausea, Soseki is reminded of Shizu's mother and believes his father's death is not far off. Soseki is tending to his father when his brother hands him a letter from Sensei. Distracted with worry, Soseki only glances over the letter until he reaches the end and realizes Sensei has decided to kill himself. Soseki searches the pages for answers but finds nothing that satisfies him. Frantic, Soseki sneaks out of the house and hastens his way to the train station praying his father will be alive when he returns from Tokyo and that Sensei will be alive when he arrives there. Once Soseki boards the train, he re-opens Sensei's letter.

Sensei is nearly twenty when he loses both his parents to typhoid. Sensei's young life is made more difficult when he learns that his uncle, who has been left in charge of his finances, has secretly used the money to advance his business. Sensei is hurt by the betrayal and angry with himself for trusting his uncle. Vowing to never see his uncle again Sensei sells everything he has left, including his family home, and returns to Tokyo. Sensei moves out of the student boardinghouse and finds a room for rent in the home of a soldier's widow and her daughter. Though he is becoming ever misanthropic and suspicious, Sensei still cannot help being affected by the widow's trusting nature. Sensei also quickly falls in love with the widow's daughter, Ojosan. As Sensei's unchecked emotions overtake him, he is caught between feeling suspicious of the mother and daughter of being after his money and feeling love and respect for them. Sensei finally discloses his past to them, but does not feel confident enough to disclose his feelings for Ojosan.

Sensei, out of concern, invites his friend K to live with him. Believing K's ideas of torturing his body for the glorification of his soul to border on madness, Sensei attempts to "humanize" his friend. However, fearing harsh disagreement will lead K into further isolation, Sensei leaves the environment and natures of the women to influence K. When Sensei begins to suspect K and Ojosan have feelings for one another, he is overcome with jealousy and his opinion and treatment of K slowly changes. When K finally divulges his feelings for Ojosan, Sensei forgets to treat his friend gently and instead treats him as an enemy in battle. Sensei berates K for his feelings and charges he is betraying his religion. Though K agrees and says he wishes to forget about his feelings for Ojosan, Sensei does not trust him. One morning Sensei stays home from school to privately ask Okusan for her daughter's hand in marriage. Okusan agrees, filling Sensei with relief, but he cannot bring himself to tell K what has occurred. When K kills himself soon after learning of their engagement from Okusan, Sensei is overcome with grief, guilt, and shame. Though unexpressed in K's suicide letter, Sensei believes K's death partially results from his deceitful engagement to Ojosan.

Sensei and Ojosan live together for many happy years, however when each is alone with Soseki both admit Sensei has erected a barrier which prevents them from experiencing a deep emotional bond. Sensei does not want to spoil his wife's innocence with the ugliness that became of his relationship with K due to their love for her; therefore, there is much that goes unsaid between them. Sensei's guilt often overtakes him and he becomes addicted to books and alcohol in turn. Finding neither will assuage his pain for long, Sensei eventually gives up on both, only allowing himself small increments of alcohol to induce high spirits.

When first Emperor Meiji and then General Nogi die, Sensei decides it is time to tell Soseki his life story and requests Soseki visit. When Soseki is unable to return to Tokyo due to his father's illness, Sensei commits himself to writing his testament to his closest and truest friend. Sensei wishes that his life story be a guide to those who wish to learn something about life; however, Sensei still cannot stand the idea of his wife's innocence being compromised. His only requirement for Soseki is that his story not be publicized until his wife has passed. With his final request, Sensei tells his young friend he will be dead by the time the letter reaches him.

More summaries and resources for teaching or studying Kokoro.