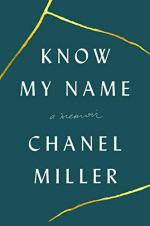 Chanel Miller
This Study Guide consists of approximately 56 pages of chapter summaries, quotes, character analysis, themes, and more - everything you need to sharpen your knowledge of Know My Name.

This detailed literature summary also contains Topics for Discussion on Know My Name by Chanel Miller .

The following version of this book was used to create this study guide: Miller, Chanel. Know My Name. New York: Viking, 2019.

The memoir opens with Chanel Miller recounting the events of the night of her assault, January 17, 2015, as best she can remember them. Her sister Tiffany was in town from college, and the girls, along with Tiffany's friend Julia, ate dinner at Miller's parents' house, then had her mother drop them off at Stanford University to attend a fraternity party. Miller had some drinks and danced, trying to embarrass her younger sister. She remembers going outside to urinate and then nothing until she woke up in a hospital bed. Two men were in the room, a police officer and the dean of Stanford. She was told she may have been sexually assaulted. The nurses from the Sexual Abuse Response Team (SART) arrived and conducted a thorough examination of Miller's body. She had cuts on her arms and pine needles in her hair. She was then asked to give a statement to a detective about everything she remembered. Tiffany arrived, sobbing, and Miller pretended to be upbeat and happy so her sister would calm down. She still had no idea precisely what happened to her.

She learned the details in a news article she read at her work desk days later, that she had been digitally penetrated by a freshman named Brock Turner while unconscious, that two Swedish students had seen the attack and stopped it, chased Turner, and held him down until police arrived. Turner was on the Stanford swim team, and some believed that he might eventually swim in the Olympics. His parents posted his $150,000 bail. Miller pressed charges against Turner and received a call from the prosecutor assigned to her case, Alaleh Kianerci.

Miller's boyfriend Lucas arrived from Philadelphia (where he attended graduate school), and she reluctantly told him about the assault. Miller had phoned Lucas that night and he had expressed concern because she was so obviously intoxicated. The preliminary hearing for Turner's trial was repeatedly rescheduled, and Miller decided to enroll in a printmaking program at the Rhode Island School of Design in Providence. She was suffering from severe post-traumatic stress disorder (PTSD) and needed a distraction. When the program ended, she moved in with Lucas in Philadelphia. When she finally testified at the preliminary hearing, she broke down, sobbing as she recalled waking up in the hospital. Turner's defense attorney tried to manipulate Miller to get her to lie or to say the encounter was consensual.

Back in Philadelphia, Miller signed up for a comedy club sponsored by Lucas' school and wrote and performed an act before an audience. Her act was a hit, and she regained a modicum of confidence. In January 2016, a year after the assault, Lucas took her to Indonesia on vacation, then she returned to Palo Alto to testify at Turner's trial. Once again, Alaleh guided Miller through the events of that night, and Miller broke down in tears. The defense attorney tried to convince the jury Miller had consented. He also presented character witnesses who claimed Turner was a good person, an excellent swimmer with a sterling reputation. The lawyers then made their closing statements and Miller went home to wait for the jury's decision. It came just a day later. They found Turner guilty on all three charges—sexual penetration of an unconscious woman, sexual penetration of an intoxicated woman, and assault with intent to commit rape.

After the trial, Miller continued to suffer symptoms of PTSD. She was contacted by Michele Dauber, a professor at Stanford who was hoping to convince the administration to make meaningful changes to the way they address sexual assault on campus. She also received a call from the probation officer in charge of Turner's case who asked her opinion on Turner's sentencing. She expressed her hope that Turner would receive counseling. Miller also began working on a victim impact statement she would read at the sentencing hearing. Alaleh called and told Miller that the probation officer had recommended a light sentence, having misunderstood Miller's comments about her feelings on the matter. At the hearing, Miller read her impact statement, a passionate condemnation of Turner and his refusal to admit that the assault was not consensual and take responsibility for his actions. The judge argued that Turner had suffered “adverse collateral consequences” (234) as a result of the trial and gave him a light sentence, just six months in jail.

With Miller's permission, the website BuzzFeed published her impact statement, and it was read by 15 million people in just a few days. Miller received countless letters and messages of support, and she felt like she belonged to a community of sexual assault survivors. Michele Dauber began a campaign to have the judge in Miller's case, Aaron Persky, recalled by voters. It was successful, and Persky was the first judge to be recalled in California since 1932. Dauber's efforts to convince Stanford to reevaluate their system for handling sexual assault on campus, however, were met with resistance. The school did pay Miller $150,000 to cover therapy expenses and turned the area outside the fraternity where she was assaulted into a park. But when they asked Miller for a quote to inscribe on a bench in the park and she provided a phrase from her impact statement, it was deemed too controversial.

In the final pages of the memoir, Miller recalls the events of the Me Too movement, celebrating the courage of the victims that came forward to speak out against their abusers. The book closes with Miller's impact statement, the final words of which are directed at other victims: “To girls everywhere, I am with you” (357).

More summaries and resources for teaching or studying Know My Name.