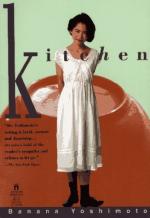 Banana Yoshimoto
This Study Guide consists of approximately 49 pages of chapter summaries, quotes, character analysis, themes, and more - everything you need to sharpen your knowledge of Kitchen.

This detailed literature summary also contains Bibliography and a Free Quiz on Kitchen by Banana Yoshimoto.

Kitchen is the title of a novella by Mahoko ("Banana") Yoshimoto, and it is also the name of the book containing that novella along with the novella Moonlight Shadow. When the book was published in Japan in 1988, it was an immediate success, propelling its author to a superstar status in the literary world that she has managed to maintain since then, due in part to her tremendous output, averaging a book a year. With the English release of Kitchen in 1992, her U.S. publisher gambled a fortune on pre-publication publicity, having posters of the author plastered on walls in major American cities. The book went on to be a major best-seller and "Banana-mania" eventually spread across the globe. Yoshimoto's fans tend to be fanatical in their ardor, exchanging testimonials and gossip about the author on the Internet and anxiously speculating about which novel will be the next one translated into their own language.

In the novella Kitchen, the elements of a typical Banana Yoshimoto work can be found. Death, the occult, sexual ambiguity, love, physical beauty, and the trials and tribulations of young adults living in the big city are themes that present themselves, to varying degrees, in most of her works of fiction. It is Yoshimoto's penchant for exploring the same territory time and again, along with her self-professed goal of providing an upbeat ending, that lead to criticism of her work as derivative and saccharine. Yet it is plain to see, from the wide range of her readership and the intensity of their devotion, that Banana Yoshimoto is a writer who has earned respect and serious consideration.

More summaries and resources for teaching or studying Kitchen.

Kitchen from Gale. ©2005-2006 Thomson Gale, a part of the Thomson Corporation. All rights reserved.