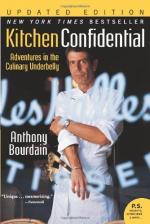 Bourdain and his family sail to Europe on the Queen Mary ocean liner in 1966.

Bourdain and his family spend time on the Normandy coast during their summer vacation in 1966.

Eating oysters as a boy in France changes Bourdain's view on food and his visions for his future in the culinary arts.

Bourdain spends the summer of 1973 with friends in the village of Provincetown, Cape Cod, Massachusetts.

Bourdain's first restaurant job is as a busboy at The Dreadnaught in Provincetown, Cape Cod.