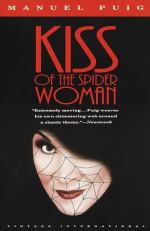 The Kiss of the Spider Woman Summary & Study Guide

Manuel Puig
This Study Guide consists of approximately 24 pages of chapter summaries, quotes, character analysis, themes, and more - everything you need to sharpen your knowledge of The Kiss of the Spider Woman.

The Kiss of the Spider Woman Summary & Study Guide Description

The Kiss of the Spider Woman Summary & Study Guide includes comprehensive information and analysis to help you understand the book. This study guide contains the following sections:

This detailed literature summary also contains Topics for Discussion on The Kiss of the Spider Woman by Manuel Puig.

Valentin Arregui Paz, called Valentin, and Luis Alberto Molina, called Molina, are cellmates in an Argentine prison. Valentin is studious, while Molina is far more open and talkative; the beginning of the novel is riddled with brief moments of conflict between the two, and it is clear that they have opposing views on many subjects.

To pass the time, Molina offers to tell what he remembers of a film he once saw to Valentin, who agrees to listen. He tells the story of a woman whose fear that she will morph into a panther come true when she suspects her husband is seeing another woman. Throughout the story, Valentin interjects with his own, usually cynical, opinions about the characters and their motivations.

Later, Molina tells another story, one that Valentin finds offensive because of its obvious propagandistic elements. A young French woman whose country has been occupied by the Germans during World War II falls in love with a Nazi lieutenant. Though Valentin claims to only be interested in the story as an example of propaganda, he is clearly interested in discovering what happens to the protagonist. Molina falls ill after dinner and continues the story to distract himself from the pain. The woman exudes incredible bravery in her successful attempt to help her lover capture the rebel forces that had tried to extort top-secret information from her, but she is mortally wounded in the ensuing shootout. The story finished, the two men drift off to sleep.

The next day, Molina is still not feeling well, but Valentin says he has to study and ignores him. The sullen Molina tells himself a story about a young man who accompanies his fiancée to a secluded house in the woods where they would like to live, attended by an ugly maidservant. However, the man is wounded and disfigured in the war, and he comes to live there by himself. In time, he falls in love with the young maid and the two, through the power of their love, are transformed and made beautiful in each other’s eyes, though the outside world still sees them as physically unattractive.

The next day, the bad feelings between Molina and Valentin have passed, but now Valentin is ill with the same symptoms Molina had. To distract him, Molina tells him another story; this one involves a young man who supports the revolution taking place in a South American country, though he lives in Europe. His father is kidnapped by the guerrillas the son supports, and in the son’s rescue attempt, his father is killed.

Valentin refuses to ask to be let out to use the bathroom, for fear of being sent to the infirmary, and has an accident in the cell. Molina helps to clean him up without making a fuss over it. Valentin confesses that the woman he had previously described as his girlfriend is, in fact, Marta, a woman who he had fallen in love with years ago but who he is no longer in contact with.

Valentin receives a letter from his current girlfriend, who is also involved in the rebel cause, in which she tells him of the death of one of their comrades. Valentin cannot make it to the bathroom again, and again Molina helps clean him up. Valentin breaks down and confesses his despair at the death of his friend and fellow rebel soldier, then drops off to sleep. Molina finishes the story in his own internal monologue. The son discovers his mother was instrumental in the plot to murder his father, and he goes berserk, murdering her and her lover, and then attempting to kill the guerrillas he had recently joined.

In the next chapter, which consists of a conversation between the prison warden and Molina, it is revealed that Molina is working as a double agent, attempting to glean information from Valentin about his comrades and their plans. The food has been poisoned, which is why Molina and Valentin were ill. Molina convinces the warden to give him groceries to help him create an alibi, and when he returns he shares the food with Valentin, who is still ill. He begins another story, in which a young woman discovers her new husband, a plantation owner, uses zombies to work in his fields.

Valentin throws a temper tantrum, destroying some of Molina’s food and belongings in the process. The next day, Molina meets again with the warden and reports that he has discovered no new information. He asks for permission to lie to Valentin and tell him that he will soon be pardoned so as to perhaps put pressure on Valentin to give him the information he wants, and the warden agrees.

When Molina returns to the cell, Valentin apologizes for his outburst, and Molina replies that he understands Valentin tries to keep himself from getting too attached to people by any means necessary. Later, Molina expresses great sadness about his impending ‘pardon,’ and Valentin goes to him to offer comfort; the two end up making love.

The next morning, Molina begins what will be his final story; a young, wealthy woman and a journalist meet and fall in love. He meets with the warden again to tell him he has no new information, and the warden tells him he will be released the next morning. That night, after Molina finishes telling Valentin the story, which ends with the death of the journalist, the two make love one final time. Molina agrees to contact Valentin’s comrades to pass on a message to them.

A government surveillance report details Molina’s activities after his release. He attempts to contact the rebel forces and is gunned down by a passing car while waiting for them, presumably by the rebels in anticipation of the impending arrest and torture he would endure at the hands of officials trying to gain information about the guerrillas. The final chapter shows Valentin being administered morphine by a prison doctor. He has just been tortured, and as he drifts into unconsciousness he dreams of being reunited with Marta once more.

More summaries and resources for teaching or studying The Kiss of the Spider Woman.

The Kiss of the Spider Woman from BookRags. (c)2022 BookRags, Inc. All rights reserved.