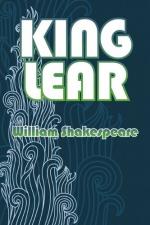 William Shakespeare
This Study Guide consists of approximately 44 pages of chapter summaries, quotes, character analysis, themes, and more - everything you need to sharpen your knowledge of King Lear.

King Lear is one of Shakespeare’s most popular tragedies, exploring the role of power and deceit among families through the flawed relationship between King Lear and his three daughters.

At the opening of the play, the ageing King Lear decides that he would like to retire, so he divides the country between his three daughters, Regan, Goneril, and Cordelia. But first, he asks his daughters to profess how much they love him, saying that he will reward the most loving daughter with the most land. His eldest two daughters, Regan and Goneril, blindly flatter their father, but Cordelia, the only daughter to truly love Lear, remains silent. Lear flies into a rage and banishes Cordelia from England. She moves to France and marries the king without her father’s blessing and without inheriting any power of land from him. Almost as soon as they inherit their power, Regan and Goneril begin to undermine what little power Lear has left, refusing to let him travel with his knights, for example. Lear, who cannot believe that his daughters would betray him, slowly goes mad. When he is turned away from both his daughters’ homes unless he release his traveling party, Lear decides to spend the night on the heath during a bitter, brutal storm.

Meanwhile, one of Lear’s most trusted allies, a nobleman named Gloucester, is experiencing similar family troubles. He has two sons, Edgar, his legitimate heir, and Edmund, his bastard son born out of wedlock. Edmund, who because of his bastard status stands to inherit nothing from his father, plots to overthrow his father and betray his legitimate brother in his quest for power. Edmund convinces Gloucester that Edgar is plotting to kill him, and Gloucester foolishly believes him. Thinking that his father is after him, Edgar disguises himself as a beggar named Poor Tom and also travels to the heath to hide. Shortly after Edgar’s departure, Regan and her husband Cornwall discover Gloucester’s plan to aid Lear during the storm and punish him with torture. They pluck out his eyes and banish him to the heath where he is reunited with his son Edgar, who does not reveal his true identity.

Cordelia, who is now the queen of France, soon hears about her sister’s brutal treatment of their father and vows to send a French fleet to Dover to aid Lear’s cause and hopefully return him to power. In the heath, both Lear and Gloucester descend into madness, with Gloucester trying to kill himself and Lear lamenting his foolish decision to hand power over to his wicked daughters. By the time the French arrive, Lear has gone completely mad and is living in the fields covered in weeds and flowers. Meanwhile, in his quest for even more power, Edmund becomes romantically involved with both Regan and Goneril, turning the two jealous sisters against each other. At the time of the final battle between France and England, neither sister actually cares about the outcome. They only care about securing Edmund’s affections. When Lear and Cordelia are reunited at the French camp, Lear experiences a few moments of blissful sanity. His happiness is interrupted when the British quickly overpower the French and Lear and Cordelia are taken as Edmund’s prisoners. At the end of the play, nearly all the characters are dead. Goneril has poisoned Regan and then committed suicide over the botched relationship with Edmund, Edgar kills Edmund in a duel, Cordelia is hanged, and Lear dies of a broken heart. Only Albany, Goneril’s sympathetic husband, and Edgar are left to rule the devastated Britain.