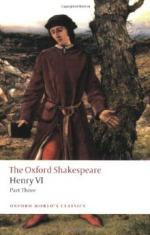 William Shakespeare
This Study Guide consists of approximately 26 pages of chapter summaries, quotes, character analysis, themes, and more - everything you need to sharpen your knowledge of King Henry VI, Part 3.

Baker provides a discussion of all three plays, as well as a useful family tree of the descendants of King Edward III. He calls Henry VI, Part Three "a play of battles, each more savage than the last," and describes Shakespeare's characterization of Richard of Gloucester as a "new advance" in the playwright's skills. x

Bergeron demonstrates how the inclusion of theatrical details makes I.iv, II.v, III.i, and III.ii function to a certain extent as plays within Henry VI, Part Three.

Bevington, David. Introduction to The Third Part of King Henry the Sixth, by William Shakespeare. In The Complete Works of Shakespeare, edited...