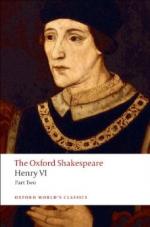 These non-speaking characters appear at II.i.65. They enter carrying the crippled Simpcox, who has supposedly regained his sight through a miracle.

These non-speaking characters appear in a couple of scenes (III.ii and IV.viii) to add to the importance of the nobility.

He appears at II.i. 144 to whip Simpcox so as to discover whether he is truly lame.

Usually referred to as Winchester in the play, he is mercilessly ambitious and a "proud prelate," as Gloucester terms him (Li. 142). His sole concern is power; this he tries to achieve with the aid of Suffolk. He is the first to urge that Gloucester's Lord Protectorship be taken away from him (I.i.147-64), and he schemes with Suffolk to achieve that end. In I.iii.128-29, he seconds Suffolk's call for Gloucester's resignation, alleging his...