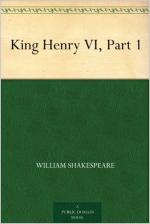 William Shakespeare
This Study Guide consists of approximately 25 pages of chapter summaries, quotes, character analysis, themes, and more - everything you need to sharpen your knowledge of King Henry VI, Part 1.

He is a French nobleman in the entourage of Charles the Dolphin. Athe siege of Orleance, he begins by deriding the English as more attracted to eating than fighting. He ends by admiring the "courage and audacity" of such "raw-bon'd rascals" (I.ii.36, 35).

They appear before Henry VI in V.i. The ambassadors from the pope and the Holy Roman Emperor have come to encourage the king to make peace with France. The ambassador from the earl of Arminack has come to request that the king and the daughter of his master be betrothed. To this last, the king agrees.

These unnamed characters appear in the formal scenes (such as the funeral of Henry V and the coronation of Henry VI) to swell the numbers.

She plays an important role in II.iii by attempting to...