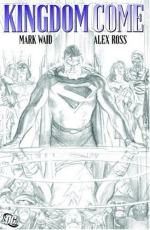 This detailed literature summary also contains Topics for Discussion and a Free Quiz on Kingdom Come by Mark Waid.

The world is in terrible shape after falling into the hands of a new breed of super heroes. Unlike the old super heroes, these skip the justice system all together and kill their adversaries. When most of those adversaries are gone, there is no one left for them to fight but each other. Innocent people begin losing their lives and that is when the old supers decide to step in.

Pastor Norman McCay hears prophesies of Armageddon given by an old man, Wesley Dodd. Norman thinks Wesley is nuts, but soon finds out after his death that he was not insane. Since Wesley shared all the visions of doom with Norman, the Spectre pays Norman a visit. The Spectre needs to know Wesley's visions so he can pass judgment on whomever is responsible for Armageddon.

Norman and the Spectre invisibly travel in and out of various time frames to witness first-hand the events that lead to Armageddon.

At the urging of Wonder Woman, Superman comes out of a 10-year self-imposed exile to fight the renegade supers. Captain Marvel also comes out of exile. Having been brainwashed for years by Lex Luthor, Luthor programs Marvel to attack Superman.

In the middle of their fight, Superman talks through Captain Marvel's brainwashing to reason with him. The bombs are headed for the gulag when Superman tells Marvel to decide who should be spared—the humans or the super heroes. As Superman flies up to deflect the bombs, Marvel passes him. Marvel detonates the bombs. Many super heroes are killed, but there are survivors. Marvel dies in his heroic act.

In the end, the old generation super heroes see how they let society down by not continuing their crime-fighting work when the new supers took their place. They also realize they have been acting above the law and above humanity for some time. The surviving super heroes tell the U.N. that they will live among them and work with them from now on.

The old super heroes find hope. The U.N. finds hope in the promises of the supers and in their opportunity to control their own human issues from now on. The Spectre even finds hope. He has watched Norman throughout the ordeal and grows to respect him. The Spectre takes off his hood and assumes his human persona again and becomes part of Norman's congregation.

Norman has also found hope. When his mission with the Spectre is complete, the Spectre tells Norman that he has been able to keep up with the super heroes during their travels together. "Perhaps you are more like them than you realize," he adds.