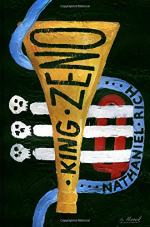 The following version of this book was used to create the guide: Rich, Nathaniel. King Zeno. MCD, 2018.

Part 1 opens on a series of clippings describing an Ax murder and a series of holdups of white citizens by a black highwayman in New Orleans. It is the 26th of May, 1918 and Bill and Charlie, two detectives, searching for the highwayman. They find one of their fellow detectives murdered by the highwayman and Bill kills a black man he thinks is the highwayman. At the same time, Isadore is walking to meet his wife, Orly, who works for the Tilton’s as a nanny. He is stopped by a policeman on the watch for the highwayman and has to hit him in the eye to escape. In the morning Bill meets his wife Maze at a baseball game and is honored as a veteran.

On May 29th, Isadore is with his friend Frank Bailey, who is the highwaymen the police have been searching for. Isadore has been helping his friend with the hold-ups, but he wants out. The police arrive at the door, and Bailey is arrested while Isadore hides. A few days later, Beatrice is visiting the future site of the canal her construction company is building with funding from Hibernia bank. She is with the nephew of the owner, Hugh Davenport, who she calls Hugs. She operates a shadow business that protects the construction company, and it allowed her to attain a monopoly on the construction of the canal. Her son Giorgio appears, his ear is bleeding from an old war injury. A month later, Isadore is digging in the canal with his friend and Band-mate Sore Dick. Giorgio believes they have been working too slowly and hoses them with a power hose.

On June 27th, Bill wakes up next to his wife. She asks him to tell her about his experiences on the front, he never has before. He tells her an abridged version: the dugout collapsed and he was one of the only people to escape. He thinks he sees the ghost of Leonard Perl, a man who died in the dugout collapse, and chases after him but only finds an old woman. The next day, Beatrice is being treated by her son Giorgio, who is trained in osteopathy, when Hugs arrives. He expresses concern to Beatrice that her shadowy dealings will jeopardize the building of the canal. A few days later, Isadore is at his biggest gig but has to give a watch Orly gave him to a drummer to get him to play. He feels amazing but finds out his wife may be pregnant.

On July 3rd, Beatrice is up late worried about where Giorgio is. She suspects he may be responsible for the ax attacks. She thinks about her desire to be immortal and her calculated attempts to attain immortality. Giorgio arrives home freshly showered. The next day, during Fourth of July festivities, Charlie is shot by Leonard Perl, who was aiming for Bill. Bill races home and realizes that Perl found Bill's house address from his wife Maze. He takes her to his parent's house and then finds Leonard standing outside his house. They fight, Leonard, says that Bill is a coward and that he ground the boot of his heel into Leonard's eye. The police arrive and shoot Leonard, and Bill tells Maze that what Leonard said was true.

In part 2, a series of newspaper clippings describing more Ax attacks, and the outbreak of influenza in the city. It is March 1st, 1919, and Charlie and Bill are investigating a dead body that was found at the canal site. Bill has felt numb since his wife left him last year. They realize the dead body is that of a grocer. They visit the grocery, and it is being run by a ten-year-old, no one will give them any answers. Bill thinks about the Axman case, how it had stirred people into a fervor, but no attacks had occurred since the outbreak. Maze had left with her parents when the flu came, and Bill tried to tempt death by volunteering for the hospital, but he was left alive. A day later Isadore plays music at a white hotel and decides to give up music.

On March 4th, Bill runs into Maze and she tells him that she didn't mind his cowardice, it was the fact that he lied to her about himself. Bill goes home and realizes he needs to catch the Axman in order to get Maze back. The next day Beatrice thinks back to a year ago when she had contracted a prostitute, Rosie, to watch over Giorgio, as Beatrice was sure he was the Axman, and she is glad that he has not attacked anyone since. A day later, Bill visits Teddy Obitz's house, who was investigating the Axman murders before he was killed. He is seduced by Teddy's widow. A few days later Isadore is trying to hold people up, but he realizes the only weapon he needs is the trumpet and throws the gun into the canal.

On March 10th, Beatrice confronts Rosie about her son and sees that Rosie is terrified of Giorgio. She realizes that bad Giorgio has returned. The next day Bill tells Capo about his theory that there is a crime syndicate protecting grocers and that it is somehow involved with the Axman murders. Capo dismisses him. The next day Hugs confronts Beatrice and says that he and his father, the head of Hibernia bank, believe Giorgio responsible for the dead grocer found in the canal. Beatrice finds her son at the whorehouse and Giorgio tells her that he knows that she poisoned her husband and that he taught her to take what he wants, no matter what. Beatrice looks into his eyes and sees her own staring back.

Part 3 begins with a newspaper article that consists of a letter sent to the newspaper claiming to be the Axman. He is from Tartarus, and he will kill again on Tuesday night, but houses that play jazz music will be safe. On March 18th, Charlie and Bill are at the canal again, because an arm was found. Bill arrived after visiting Maze at the hospital, where she has been admitted with the flu. Maze says she wants to know about what he is afraid of. At the canal, they found two bodies and the head of Hugh Davenport. Bill sees Leonard Perl's face on Hugh's head. The next day Isadore is coming home from playing at the Van Benthuysens Mansion, who paid his band to play on the night the Axman is supposed to visit for fifty dollars. The street is filled with music and revelers, and Isadore is both proud and ashamed for writing the letter that led to everyone embracing Jazz. When he arrives at home, Orly says an enormous white man showed up at their door saying Isadore lied. A few days later, Beatrice is kicked off the board of the canal, and Rudolph says he will investigate the murder of his nephew. The next day Bill steals the Axman letter from the office of the editor of the newspaper.

On March 22nd, Sore Dick tells Isadore they have a gig on Friday at the most prestigious of the venues for the white citizens of New Orleans. Orly goes into labor and they take her to the hospital, where she sings an old song as she gives birth. The next day, Beatrice is searching for Giorgio, she visits where he used to fish as a child but it has been destroyed by the building of the canal. She thinks she sees the boy Giorgio outside the church they used to visit, and chases after him, saying goodbye. The next day Bill brings the Axman letter to a handwriting expert, who says the script is a special kind. Bill remembers that Frank Bailey wrote in the same script, and visits him in jail and asks him where he learned the script. Frank Bailey says at the Waifs house. He also says that Teddy Obitz's partner was the one who killed him, not Frank. The next day Isadore is sitting with Frank Bailey in court, and Frank tells him that a detective asked him where he learned his writing. Frank leaves, afraid for Orly.

On March 28th, Giorgio appears outside Beatrice's door. She has not seen him in two weeks, invites him to dinner. She feeds him dinner, he reveals that he has kept many secrets from her and handled aspects of the shadow business for a long time. She poisons him the same way she poisoned her husband. Giorgio says he has to go to a jazz concert. The same day Bill is attending the Jazz concert, after discovering that Isadore is the one who wrote the letter. He sits with Capo and Giorgio. Isadore is playing onstage and it is amazing, and the crowd is loving him. Afterward, Bill brings Isadore to his car and drives him to the canal. He knows that Isadore isn't the Axman, but he is using him as bait to catch the real Axman. At the canal, Giorgio gets out of the car. His mother arrives, and Giorgio realizes he has been poisoned. He kills Beatrice's driver and chases her until she falls down into the canal. He charges Bill and lands on top of him. Isadore shoots Giorgio and pulls him off Bill, who is driven home by Maze and Charlie, while Isadore thinks about all the animals who lived on the land.