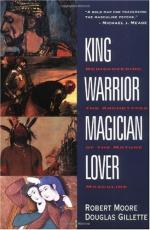 King, Warrior, Magician, Lover: Rediscovering the Archetypes of the Mature Masculine by Robert Moore and Douglas Gillette is the study of the four main archetypes of the male personality. The book begins with the authors stating the crisis that young men face today because there are no ritual elders to guide them into manhood. From there the authors explain the immature sides of the male personality and then discuss the fully-formed male archetypes of King, Warrior, Magician and Lover. Through the ages, boys and young men have experienced rites of passage that transition them from their immature emotional states to that of the mature male state. Stories reaching back to the days of cave paintings illustrate these initiations and the death of the boy's psyche in order to make room for the persona of the mature male. Typically these rites of passage are headed by a Ritual Elder who embodies wisdom and insight and is the overseer of the boy's passage. Today, though, the authors claim that the figure of the sage Ritual Elder is missing in society and boys are forced to endure their initiations into manhood without proper guidance resulting in flawed relationships and negative patterns. Carl Jung, the noted Swiss psychologist, declared that boys have internal blueprints called archetypes which help them grow toward their potential as a mature male. These archetypes are King, Warrior, Magician and Lover. It is up to mature males to provide examples of these archetypes from which the boys can model. As a boy grows, he is defined emotionally as a Divine Child, an Oedipal Child, the Precocious Child and the Hero. Each of these personas has both positive and negative characteristics which then evolve into the mature archetypes. The Divine Child will grow into the King; the Oedipal Child will grow into the Lover; the Precocious Child will grow into the Magician; and the Hero will grow into the Warrior. Each of the mature archetypes also has negative characteristics, the shadow side, and it is the responsibility of the mature male to overcome any negative traits to become fully functioning in each of the archetypes. While the shadow side may be sublimated, it is important to note that is never disappears, and most men struggle with their own shadows for a lifetime. The authors believe that the shadow side can be sublimated through different techniques, some as simple as acting out the part of the positive behavior until that behavior becomes second nature. Understanding the roles of the four archetypes is a basic principle of Jungian psychology and the foundation for any male interested in personal growth.

More summaries and resources for teaching or studying King, Warrior, Magician, Lover: Rediscovering the Archetypes of the Mature Masculine.