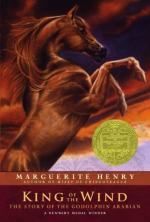 1. Marguerite Henry has been criticized for shifting too abruptly from one scene, location, or part of the story to another. Are there any shifts that seem especially sudden to you? Take several transitions in the book and show why they work or do not work well.

2. Henry has been praised for her vivid scenes. Take at least two scenes and show how language, narration, and descriptions of characters and their actions make them come alive. What do the illustrations add to her descriptions?

3. Compare two ruling or powerful characters in the book. Is either of them all good or all bad, or are their moral qualities mixed? What limitations are there on their power?

4. The kindly characters in the book who want to help Sham and Agba often cannot. Why? Are there any points where you think such characters&mdash...

King of the Wind from BookRags. (c)2023 BookRags, Inc. All rights reserved.