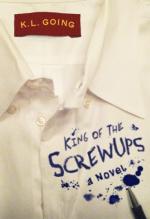 KL Going
This Study Guide consists of approximately 34 pages of chapter summaries, quotes, character analysis, themes, and more - everything you need to sharpen your knowledge of King of the Screwups.

King of the Screwups Summary & Study Guide includes comprehensive information and analysis to help you understand the book. This study guide contains the following sections:

This detailed literature summary also contains Topics for Discussion on King of the Screwups by KL Going.

King of the Screwups is a novel by Printz Honor Winner K.L. Going. The story follows the main character, Liam Geller, as he tries to come to terms with the fact that no matter what he does or how hard he tries, he manages to screw situations up and disappoint his father. When Liam's father, Allan Geller, discovers his son and a girl about to have sex on his office desk, Allan declares this event "the last straw" and tries to ship Liam off to live with his grandparents in Nevada. Instead, Liam ends up moving in with his cross-dressing uncle in a trailer park in a small town in upstate New York. Uncle Pete is Allan's estranged brother that Liam hasn't seen since his mother's modeling retirement party when Liam was seven.

When Liam arrives in Pineville, New York, he decides the best way to succeed is not to rely on his popularity. His father's term for Liam, Mr. Popularity, seems to be what has been landing Liam in all this trouble. Liam sets out to make himself one of the most unpopular kids in school. As usual, Liam's plan backfires. He winds up making the neighbor that his age, Darleen, think he's a pompous moron, and making all of the popular kids at school think he's a hero.

Even when Liam helps one his uncle's friends, Eddie, in his boutique, Liam doesn't see that he is a talented person, just not in the way that his father is. While Liam tries to enlist in the army to make his father proud, his mother and uncle finally stand up for Liam against his controlling father. For the first time, Liam gets to make some of his own decisions and focus on the positive aspects of his life rather than dwelling on all the negativity.

More summaries and resources for teaching or studying King of the Screwups.

King of the Screwups from BookRags. (c)2022 BookRags, Inc. All rights reserved.