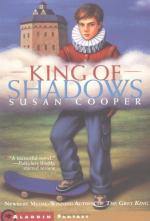 Susan Cooper
This Study Guide consists of approximately 38 pages of chapter summaries, quotes, character analysis, themes, and more - everything you need to sharpen your knowledge of King of Shadows.

This detailed literature summary also contains Topics for Discussion and a Free Quiz on King of Shadows by Susan Cooper.

King of Shadows by Susan Cooper is a tale about a young boy's journey to overcome his devastating past in exchange for a hopeful future. Nat is an orphan who escapes into the world of the theatre to avoid his sadness. Nat is magically transported back to Elizabethan England, where he becomes apprenticed to William Shakespeare, who helps Nat learn to face his emotions and properly grieve his parents.

King of Shadows is a thoughtful tale of discovery set in one of the most exciting times in the history of the theatre. The year is 1999, and the Company of Boys gather in Cambridge, Massachusetts, to rehearse productions of William Shakespeare's Julius Caesar and A Midsummer Night's Dream. The company's director stresses the importance of the group functioning as a family, and the company spends a lot of time playing theatre games to build trust amongst the group. The Company of Boys will rehearse in the United States for three weeks, and then will travel across the Atlantic to London, England, to perform their plays at the Globe Theatre.

In London, Nat falls suddenly ill during rehearsal, and goes to bed to fight off the sickness, which turns out to be bubonic plague. Nat wakes up the following morning, four hundred years in the past, in 1599. Nat slowly starts to piece everything together and realizes he may have traveled to Elizabethan England. Nat is taken to the Globe Theatre, where he learns he has been borrowed from the St. Paul's School to play the role of Puck in A Midsummer Night's Dream. Nat is introduced to Shakespeare, who is one of his idols, and learns he will be playing opposite Shakespeare in the performance. Nat joins the other apprentices in Shakespeare's acting company, the Lord Chamberlain's Men, in their daily classes, and Nat has a chance to show off his incredible tumbling skills.

Nat unintentionally makes enemies with Roper, one of the apprentices, who is envious of Nat's privilege as a St. Paul's School student. Roper makes Nat's life difficul, and gets him in trouble with Richard Burbage, one of the senior members of the Chamberlain's Men. When Roper challenges Nat to come with him to watch a bear fight, Nat has no choice but to attend. When Nat sees the blood spilling on the floor during the fight, he has a flashback to finding his father's body after he committed suicide, and he runs away from the fight. Roper continues to tease Nat for being a wimp for leaving the fight.

At the theatre later that day, Roper chokes on an apple, and Nat performs the Heimlich maneuver to save him. The members of the company are shocked because the Heimlich maneuver has not yet been invented. Because of this, some of them begin to think Nat is a white witch. Later that night, Harry, one of the apprentices, tells Nat about the political climate of Elizabethan England. Nat starts to worry for the safety of the Queen if she attends A Midsummer Night's Dream. Before Nat goes to bed that night, Shakespeare gives him a poem about the everlasting power of love. Shakespeare tells Nat that his father still loves him, even though he killed himself.

The next day is the performance of A Midsummer Night's Dream, and everyone is nervous with anticipation. Soldiers arrive to inspect the theatre, indicating that the Queen will in fact attend the performance. The play commences and goes according to plan. At the end of the play, Shakespeare has decided to dress the character of Queen Hippolyta to look like Queen Elizabeth I. The audience loves the costume and cheers in support of the Queen, who they do not realize is at the theatre watching this. The Queen loves the performance, and asks to Chamberlain's Men to perform at her palace the following month. After the successful performance, Nat joins the rest of the Chamberlain's Men to celebrate at the local tavern. Nat asks Shakespeare if he can stay in the Lord Chamberlain's Men instead of returning to St. Paul's School. Shakespeare tells him he must return to school, but that he will save him a place in the company for when he graduates.

Nat goes to sleep feeling hopeful, and wakes up back in 1999, fully recovered from the plague. Nat is devastated to lose a second father figure, and becomes emotionally volatile. Nat returns to rehearsal for A Midsummer Night's Dream with the Company of Boys, but is dissatisfied with the contemporary production. Nat argues with Arby, the director of the production, and runs from the theatre in tears after the director speaks badly of Shakespeare. Nat tells his friends Gil and Rachel about his trip to 1599, and they believe him. The three of them do research and discover that Nat must have switched with another Nat Field from 1599, who had bubonic plague, in order to save Shakespeare from catching the disease. Arby tells Nat that he intentionally cast Nat in the Company of Boys so that the swap could take place. With this new understanding, Nat is able to find significance in his past and can finally address his grief properly.

More summaries and resources for teaching or studying King of Shadows.