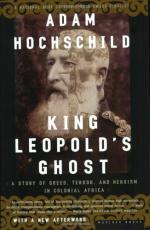 Adam Hochschild
This Study Guide consists of approximately 41 pages of chapter summaries, quotes, character analysis, themes, and more - everything you need to sharpen your knowledge of King Leopold's Ghost.

This detailed literature summary also contains Topics for Discussion and a Free Quiz on King Leopold's Ghost by Adam Hochschild.

Leopold II, King of the Belgians, privately controlled and owned the Congo Free State from 1885 to 1908. In 1908, the area was annexed by Belgium as a colony known as the Belgian Congo. Leopold used his personal control to strip the county of vast amounts of wealth, largely in the form of ivory and rubber. These labor-intensive industries were serviced by slave labor, and the local peoples were forced to work through various means, including torture, imprisonment, maiming and terror. Christian missionaries and a handful of human rights organizers internationally publicized these atrocities. Slowly, various nations, including Great Britain and the United States of America, began to object to Leopold's tyranny with the result that the country's administration was transferred to Belgium. Little changed inside the country, however, until the ivory and rubber were exhausted.

European interest in the African continent can be traced back to the late 1400s, when a European explorer sailed the west coast and discovered the Congo River. By the 1860s, most African coastal regions were claimed as colonies of European powers, but the vast interior of the continent remained unknown to Europeans. Henry Morton Stanley, a complicated man and renowned explorer, ventured through much of that unknown during a descent of the Congo River. Leopold II, King of the Belgians, was fascinated with obtaining a colony and focused upon claiming the interior of Africa—the only unclaimed sizable geographic area. Moving within the European political paradigm existing in the early 1880s, Leopold gained international concessions and recognition for his personal claim to the Congo Free State.

His rule of the vast region was based on tyranny and terror. Under his direction, Stanley again visited the area and extracted favorable treaties from numerous local leaders. A road and, eventually, a rail line were developed from the coast to Leopoldville (present Kinshasa). A series of militarized outposts were established along the length of the Congo River, and imported paddle wheelers commenced regular river service. Native peoples were forced to gather ivory and transport it for export. Beginning c. 1890, rubber—originally manufactured from coagulated sap—became economically significant in international trade. The Congo was rich is rubber-producing vines, and Leopold transitioned his exploitative focus from dwindling ivory supplies to the burgeoning rubber market. Rubber harvesting is labor-intensive and slavery, exploitation and the reign of terror continued and even increased.

Meanwhile, early missionaries and human rights advocates began to circulate news of the widespread atrocities committed in the Congo under the official blessing of Leopold's administration. Women and children were imprisoned as hostages to force husbands and fathers to work. Flogging, starvation and torture were routine. Murder was common—tribes resisting enslavement were wiped out; administration officials expected to receive back a severed human hand for every bullet issued. Rape and sexual slavery were rampant. Workers failing to secure assigned quotas of rubber were routinely mutilated or tortured. Administration officials so completely dehumanized local peoples that at least one decorated his flower garden with a border of severed human heads. News of these atrocities brought slow, but powerful, international condemnation of Leopold's administration leading, eventually, to his assignment of the country to Belgian administration.

In 1908, Belgium annexed the Congo as a colony and proclaimed a general sea-change in administrative policy. Actual change, however, was nearly imperceptible. The era of World War I shifted attention from atrocities in Africa to European trench warfare. In the post-war era, the global demand for reform was largely forgotten. However, commercial rubber tree farming had become firmly established and the collection of wild rubber became commercially insignificant, just as ivory supplies had been exhausted years earlier. Because of this, the slave labor industries of the Congo diminished in importance and atrocities became far less frequent. Finally, in 1960, the Congo gained independence.