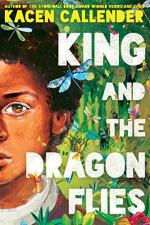 Related Topics
Felix Ever After

Kacen Callender
This Study Guide consists of approximately 49 pages of chapter summaries, quotes, character analysis, themes, and more - everything you need to sharpen your knowledge of King and the Dragonflies.

King and the Dragonflies Summary & Study Guide includes comprehensive information and analysis to help you understand the book. This study guide contains the following sections:

This detailed literature summary also contains Quotes and a Free Quiz on King and the Dragonflies by Kacen Callender.

The following version of this book was used to create the guide: Callender, Kacen. King and the Dragonflies. Scholastic Press, 2020.

King and the Dragonflies is a middle grade novel divided into 19 chapters but divided into only five sections for the purposes of this guide.

Chapters 1 - 4 introduce Kingston "King" James, a young Louisiana native who has recently lost his older brother and is struggling to come to terms with his own and his parents' grief. At school, King feels isolated from his friends, who do not understand how to respond to his grief. He hears them bullying Sandy Sanders for being gay, a boy whose father is a known racist and whose brother has been accused of racist acts, too, and King feels obligated to defend Sandy, since they were once very close. The only reason King stopped being friends with Sandy, in fact, was his older brother Khalid's insistence that others would then think King was gay, too. King's friends react with surprise at his outburst defending Sandy, so after school he runs to the bayou to visit the dragonflies that fly there, thinking that his older brother was reincarnated into a dragonfly. At the bayou, Sandy appears, telling King he is sorry for his loss. King responds warily, unsure of Sandy's kindness, but notices bruises on the boy's arm. At home later, King is eating dinner with his parents when Sheriff Sanders, Sandy's father, calls them to state that Sandy has gone missing.

In Chapters 5 - 8, King tries to comfort Jasmine who is distraught at Sandy going missing, since she was close to him, too. They join a search party with no results. Later, King returns home and goes to the tent in his yard where he used to spend time with Sandy. Inside is Sandy himself, hiding with snacks. King promises to help keep Sandy safe, suspecting that the boy is being abused at home, though the pair do not fully reconcile. The following day at school, King feels uncomfortable with Jasmine's attention as she tries to figure out if he knows anything of Sandy's whereabouts. He lashes out at her, and then at Darrell, who meanwhile is denying his feelings for a friend of theirs named Breanna simply because she is 'too tall' for a girl. King rails against the various forms of prejudice floating around him: racism, homophobia, and other petty hatreds.

In Chapters 9 - 12, Sandy needs a new hiding spot, since King's father almost caught him but did not see him clearly enough to know it was Sandy, merely thinking it was an intruder. King has an idea and takes Sandy to an abandoned shack in the bayou that Khalid once told him about. There, the pair finally reconcile and apologize to each other for the hurt they caused to one another. The following day, King recalls his words to Sandy in the tent the day Sandy came out to him: he responded saying that he thinks he might be gay, too. King wonders if Khalid heard him and despised him for it. King runs to Sandy's shack every day after school and the pair become very close. One day, while fishing, they discuss King's sexuality and his new girlfriend, Jasmine, who King confesses not to be in love with. He realizes, while speaking, that he probably likes Sandy, instead. On a day soon after, King is at home with his parents when they receive a call stating that Sandy has been found and returned to his father.

In Chapters 13 - 16, King is angry with his parents for not believing him when he tells them Sandy is beaten by his father. He tries to check in on him, but Sheriff Sanders stops him and calls his parents, outing him as gay. Soon, the whole school knows of King's involvement in hiding Sandy. His friends are furious and especially angry at him for lying to Jasmine about his sexuality. Jasmine breaks up with him but King is too full of grief to care. He and Sandy manage to meet up secretly and Sandy proposes they run away to New York together at Mardi Gras. King and his parents leave for New Orleans to go to Mardi Gras soon after, staying with King's Auntie Idris. She helps them heal after the loss of their son by speaking openly and positively about the life that he led.

Finally, in Chapters 17 - 19, King and his family head to the parade for Mardi Gras. King's father tells him he loves him no matter what his sexuality is, and his mother is similarly kind. King escapes their watch for a moment, running to the spot where he is meant to meet Sandy to run away with him. There, he tells Sandy he cannot go with him to New York because he believes their lives will get better where they are. Sandy leaves angrily, and King runs back to his parents and confesses everything to them. Sandy is found en route to New York and taken to his relatives' home. His abusive father is put into prison, and Sandy eventually returns to their hometown to live with his older brother who loves him. King and his parents feel better and have healed their grief in a positive way after being with Auntie Idris. King's friends accept him for who he is after he apologizes for all his lies.

More summaries and resources for teaching or studying King and the Dragonflies.

King and the Dragonflies from BookRags. (c)2022 BookRags, Inc. All rights reserved.