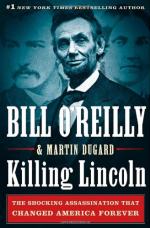 "Killing Lincoln: The Shocking Assassination that Changed America Forever" by Bill O'Reilly and Martin Dugard focuses on the conspiracy and assassination of President Abraham Lincoln.

The first part of the book focuses on the Civil War and includes many battles and plans for victory on behalf of the Union and the Confederacy. The crux of the Civil War focused on the presence of slavery in the southern states. The North was opposed to slavery and other practices in the South. The war lasted for four years under the leadership of President Lincoln and the president of the Confederacy Jefferson Davis. While the leaders made the major decisions and plans, the generals in charge of action on the battlefield were Ulysses S. Grant and Robert E. Lee.

The war was grueling and difficult. Both sides were devout in their convictions and went through untold horrors to follow their leaders into victory or defeat. The soldiers, particularly the Confederates, were starved to the point of death and had little in the way of clothing. The soldiers marched until they collapsed from exhaustion or simply could not fight any more. Many deserted and fled into the wilderness.

Robert E. Lee surrendered at Appomattox Courthouse. Although the war was over, however, the Confederates were not prepared to give up and intended on seeking revenge on the north.

John Wilkes Booth was a famous actor and well respected. Booth was also a Confederate sympathizer and had developed a hatred of Lincoln and the Union. Booth decided to take part in a conspiracy that entailed kidnapping Lincoln and holding him until the Confederacy was restored. As Booth's obsession grew, so did his hatred against Lincoln. Booth decided that kidnapping was not enough, Lincoln had to be assassinated. However, Lincoln was not the only target. Booth also had other targets in mind including Andrew Johnson, Seward, and Grant. Only the assassination of Lincoln would be successful.

Booth's plan was intricate and relied heavily on all men being assassinated at the same time. Booth would attack Lincoln at Ford's Theater. If Booth was lucky he could also assassinate Grant. Grant had other plans for the evening and was not present at the theater. Seward survived the knife attack by Powell. Atzerodt got too drunk and never attacked Johnson who would have been an easy target.

After shooting Lincoln, Booth managed to escape from the theater amid chaos. For six days, Booth and Herold traveled the Maryland countryside and finally made their way into Virginia. Booth's broken leg hindered their journey. The men were caught at Richard Garrett's farmhouse where Booth was shot and killed.

Over the next three months a vast number of suspected conspirators were arrested and tried. Mary Surratt, Lewis Powell, and George Atzerodt and David Herold are found guilty and hanged. Others are sent to prison.