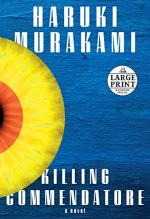 Related Topics
1Q84
A Wild Sheep Chase
Dance Dance Dance: A Novel
Hard-Boiled Wonderland and the End of the World
Haruki Murakami
Kafka on the Shore
Norwegian Wood
The Elephant Vanishes
The Wind-up Bird Chronicle
What I Talk About When I Talk About Running
Colorless Tsukuru Tazaki and His Years of Pilgrimage
UFO in Kushiro
Men Without Women: Stories
After Dark
Super-Frog Saves Tokyo
Sputnik Sweetheart
First Person Singular

Haruki Murakami
This Study Guide consists of approximately 47 pages of chapter summaries, quotes, character analysis, themes, and more - everything you need to sharpen your knowledge of Killing Commendatore.

The following version of this book was used to create the guide: Murakami, Haruki. Killing Commendatore. Harvill Secker, 2018.

The narrator of Killing Commendatore, who is never named in the novel but who is defined by his career as a portrait artist, has been happily married to his wife Yuzu for six years, when she suddenly tells him she would like to separate. He leaves their home and travels around Japan for several months; during this time he has violent sex with a woman he met in a diner, and feels sure that a stranger — the “Man with a White Subaru Forester” — somehow knows what he has done.

Months later, the artist’s friend Masahiko offers to let him stay in the mountaintop home of his father. Tomohiko Amada is a famous artist, now living with dementia in a care home. The artist takes up teaching art classes in a local school, and is soon called by his agent with a unique offer: one of his neighbors has offered to pay a fortune for a single portrait. Intrigued, he agrees to the commission. He also embarks on a long-term affair with a woman he calls his “girlfriend.” One night, he hears an owl in the attic, and when he investigates he finds a painting by Tomohiko hidden there: it is a brutal and bloody scene called “Killing Commendatore.”

The man who wants a portrait is Menshiki Wataru. Menshiki is deeply mysterious, and lives in a mansion across the valley from the artist. In this period the artist also begins to hear bells ringing in the night, and one night follows them through the woods, where he finds a shrine. Telling Menshiki about the shrine, Menshiki visits at night, and he also hears the bells. Together they dig around the shrine, where they find a stone pit. At the bottom lies a bell, but nothing else. Menshiki takes the opportunity to tell the artist that he believes he might be the father of a local girl named Mariye.

In the night the artist hears the bell ringing within his house, and finds a two-foot tall version of the Commendatore from Tomohiko’s painting. He claims to be an embodied “idea” that the artist has freed, and says he will hang around. The artist completes Menshiki’s portrait, and is invited to dinner to celebrate; the Commendatore goes with him but stays unseen by Menshiki. Over dinner, Menshiki reveals he bought his mansion solely to observe Mariye. He asks the artist to paint Mariye’s portrait, and wants to turn up during one of their sittings to meet her.

Arrangements are soon made, and Mariye and her attractive aunt Shoko turn up at the artist’s house, where Mariye views “Killing Commendatore.” The following week they meet again, and Menshiki turns up, and invites Mariye and Shoko to his house. The Commendatore continues to visit the artist, and warns him that Menshiki is a scheming person. The artist also begins to obsess about the Man with the White Subaru, who he repeatedly attempts, but fails, to paint. Mariye, meanwhile, grows suspicious of Menshiki, and seems to dislike him, though she opens up to the artist.

In the meantime, Menshiki contacts the artist regularly with his research into Tomohiko, who was involved in a failed assassination attempt during the war, and whose brother committed suicide after being forced to execute a soldier. Mariye and Shoko soon visit Menshiki’s house, and the Commendatore visits the artist, telling him more about Menshiki. That evening, Mariye arrives at the artist’s house unexpectedly, and says she suspects Menshiki is spying on her; the artist remains silent about Menshiki’s secret, but he discovers that Menshiki is becoming involved romantically with Shoko to get closer to Mariye. Around this time, the artist believes he sees the living spirit of Tomohiko Amada, looking at his own painting.

As the weeks pass, the artist hears from Shoko that Mariye has gone missing. When the Commendatore appears, he asks for his help, and the Commendatore tells him to accept the next invitation he receives. An invitation comes from Masahiko for the artist to meet his father, Tomohiko, in his nursing home. The artist goes, and when Masahiko is out of the room, he attempts to speak to Tomohiko about “Killing Commendatore.” The Commendatore himself appears, and tells the artist that the artist must kill him in front of Tomohiko. The artist does so, and the act summons another character from Tomohiko’s painting, “Long Face,” who appears through a hole in the floor.

The artist uses the hole to enter another dimension populated by strange characters amid vast and varied landscapes. He journeys for a long time through a forest before being led by a woman named Donna Anna through a series of caves. Plagued by thoughts of his sister, who died when she was 12, and the Man in the White Subaru, the artist barely makes it through the cave when he suddenly falls a short way into a dark hole. Lighting a torch, he realizes he is in the pit in his own woodland.

Menshiki rescues him from the pit, and tells him Mariye has returned home, but will not tell anyone where she was. Mariye, however, confides in the artist and says she was trapped in Menshiki’s house for four days, where she went to discover if he was spying on her. She was helped during her entrapment by the Commendatore, shortly before he died; she also saw what appeared to be a dark version of Menshiki, who briefly tried to catch her.

Tomohiko is reported dead within a week, and Mariye and the artist once again hide “Killing Commendatore” in the attic of his home. After his adventure is over, the artist returns to his wife, who is pregnant with another man’s baby, but now wants him back. Years pass and they raise the child as their own, naming her Muro. Eventually, the artist hears that Tomohiko’s house burnt down, taking with it “Killing Commendatore” and the portrait of the Man in the White Subaru.

More summaries and resources for teaching or studying Killing Commendatore.