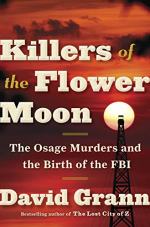 Important People in Killers of the Flower Moon: The Osage Murders and the Birth of the FBI

Tom White was a special agent with the Bureau of Investigation who investigated and solved the murders of several Osage tribe members. Before joining the bureau, White was a Texas Ranger and later a railroad detective. The author describes White as an old-fashioned, but well-respected lawman. He had a reputation for fairness and honesty, and endeavoured to treat all people, including convicted criminals, with respect. White was chosen by Hoover to investigate the Osage murders after the repeated failures of previous investigations. White assumed control of the bureau’s Oklahoma City Field Office. He assembled a team of agents, many of whom worked undercover, to investigate the crimes. Because of his background, White sometimes chafed against Hoover’s modernization efforts. Following his involvement in the Osage case, White became the Warden of Fort Leavenworth prison, where he was injured during a failed escape attempt.