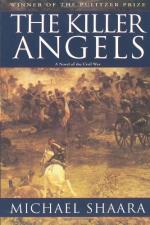 This detailed literature summary also contains Related Titles and a Free Quiz on The Killer Angels by Michael Shaara.

The Killer Angels is a novel about the battle at Gettysburg that turned the tide of the Civil War and that many credit with the defeat of the South. Although a fictional account, the novel follows the movements of many of the historical figures who were present those three fateful days in the summer of 1863. This novel gives new insight into the battle, giving it a human face filled with the conflicting emotions that must have warred within each of the historic generals who fought so bravely at Gettysburg. It is a groundbreaking novel that should be required reading for anyone who wants to truly understand the complex war between the states that was the American Civil War.

A spy makes his way to Longstreet's camp from Gettysburg where he has been watching the movements of the Union troops. Lee's army is blind because Jeb Stuart has gone joyriding instead of scouting the Union troops as he was supposed to do. Now with the information from the spy, Longstreet convinces Lee to bring his troops together and converge on Gettysburg. Lee believes that if the Union troops are really there, though he doubts they are, this could be the final battle of the war. There are only a few troops standing between them and Washington.

Buford has two divisions of cavalry with him in the small town of Gettysburg when Confederate troops begin to appear on the outskirts of town. Buford sends word to Reynolds, the closest infantry commander in the area, of the incoming enemy. Buford then scouts the town where he sits and finds the best ground to defend, preparing for battle. Soon Buford learns that Lee's entire army is headed his way. Buford is concerned that he cannot hold them alone and again sends word to Reynolds. The next day, a small division of Confederate troops begins to fire on Buford. Buford holds the line, but begins to consider falling back when Reynolds appears to save the day.

Lee has asked his soldiers not to engage until he arrives, but Heth has already picked a fight with the Union cavalry, wrongly taking them for militia. Heth is beat back. Lee sends in more troops and the Union retreats to a small hill, but Ewell, Lee's commander near the hill, refuses to take the hill, afraid that his position is not favorable. The day's fighting ends and Lee speaks with his generals, forming a plan for the next day's attack. Although Longstreet has expressed an opinion that they should flank the Union, move around the Union toward Washington, and dig in for the Union to attack them, Lee disagrees. Lee decides to attack straight on. Longstreet leads his men to the right and engages the Union in an attempt to take another hill, Little Round Top, but does not allow Hood to move to the extreme right where the Union is vulnerable, because of Lee's orders. Hood's Division takes heavy casualties, losing nearly half his men.

Longstreet visits Lee but does not have the heart to tell him that they were not victorious that day. Lee, however, insists they were. Lee plans to attack again the next day despite heavy losses. Lee wants to attack the center of the Union line, hoping the Union generals have sent most of their men out to the right and left where the Confederates attacked the day before. Longstreet argues that it will fail, as do several other generals. However, Lee is adamant. The attack fails and the Confederates are left devastated.