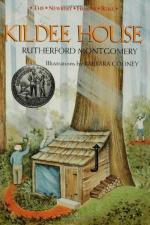 Rutherford George Montgomery
This Study Guide consists of approximately 36 pages of chapter summaries, quotes, character analysis, themes, and more - everything you need to sharpen your knowledge of Kildee House.

Jerome Kildee is retired from a career as a stonemason. He builds a house in a remote mountainside deep in a redwood forest. Kildee makes friends with the local raccoons and spotted skunks who eventually move in and live in the house with him.

Jerome Kildee is a stonemason by trade. After building his retirement home in the redwood forest, he uses his craftsman skills to erect a huge fireplace that takes up the majority of one wall.

After he retires, Jerome Kildee decides to move to California's redwood forest where he builds a one-room house on a mountainside.

Kildee's house is located off the Pacific coast. During the rainy season, a terrible storm blows up off the ocean causing his house to become dislodged from the redwood tree it had been built up against.