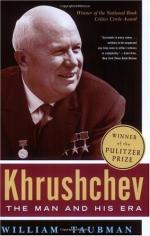 The Soviet secret police, known under a variety of names (and hence abbreviations), it is responsible for carrying out Stalin's terror in the 1930s and beyond. It is the backbone of Beria's power in 1953, but its director is too complacent to see the plot closing in on him. Khrushchev uses the KGB less brutally perhaps, but does not dismantle its information-gathering function. After his downfall, he chides successors on having the KGB bug even his bathroom.

The top-most decision makers in the Communist Party of the Soviet Union, chosen from the members of the Central Committee, who in turn are chosen from local party units nationwide. The name changes in 1952 but the function remains the same.

Khrushchev's birthplace near the Ukrainian border.

The town in the Donbas industrial region where Khrushchev began his work life in 1908, Yuzovka...