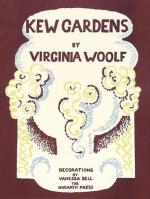 Virginia Woolf
This Study Guide consists of approximately 50 pages of chapter summaries, quotes, character analysis, themes, and more - everything you need to sharpen your knowledge of Kew Gardens.

Before World War II, the First World War was simply known as the Great War. As the twentieth century began, Germany, France, England, Russia, and Austria-Hungary intensely guarded their international territorial and economic interests, even to the point of threatening war. The assassination of Archduke Ferdinand by a Serbian nationalist in 1914 sparked a shooting war between the major power alliances (the Triple Alliance and the Triple Entente) of Europe. After four years of war, approximately ten million people were killed and over twenty million were wounded.

In 1901, Queen Victoria died. She had become queen in 1837, succeeding William IV, and had enjoyed the longest reign of any British monarch. In her old age she was very popular. Throughout her reign, she fought hard to maintain England's colonial control throughout the world. She also was opposed to granting women the legal right to...

More summaries and resources for teaching or studying Kew Gardens.

Kew Gardens from Gale. ©2005-2006 Thomson Gale, a part of the Thomson Corporation. All rights reserved.