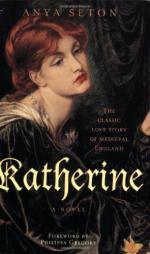 This detailed literature summary also contains Topics for Discussion and a Free Quiz on Katherine by Anya Seton.

Katherine by Anya Seton is the story of Katherine Roet. The story covers her life from the year 1366 through 1396, her forced marriage to Sir Hugh Swynford, and her enduring love affair with John of Gaunt, the powerful Duke of Lancaster. Katherine's mother died in childbirth and her father, shortly after being knighted, was killed in battle. While her older sister Philippa Roet was assigned to be a courtier in service to the queen, young Katherine was sent by the queen to an obscure Catholic convent to be raised by nuns. As a teenager, Katherine chooses, eagerly, to leave the convent and join her sister at court, unaware of the harshness and complications that she would encounter outside of the protective convent walls. While Philippa will marry the now-famous Geoffrey Chaucer, having no dowry, Katherine is coerced into marrying the rough and coarse Hugh Swynford, a knight whose social skills have much to be desired. Her new home at Kettlethorpe proves to be a nightmare of poverty, disarray and dissent. Katherine's relationship with the duchess Blanche, wife of John of Gaunt, provides a beacon for her womanhood. When Blanche passes away, and Hugh Swynford mysteriously dies, Katherine becomes the duke's paramour, but they are unable to be married, given her low station in life. The duke, in his desire to rule over Castile, marries a Castilian princess, Costanza, but keeps Katherine at his side. Katherine bears four children of John's, and they live happily in spite of the nuisance of John being married to Costanza. John's greatest insecurity lies in the possibility that he may not be the true son of the king, an idea that torments him most of his life. When the English peasants revolt, their lives are torn apart. Katherine's oldest child, Blanchette disappears. Katherine is overcome with guilt over her adulteress relationship with John and, after her long pilgrimage and a return to Kettlethorpe, the two formally separate, perhaps forever. However, later in life, John asks Katherine to marry him, and their grown children are "legitimated." Based on historical fact, this story is a fascinating series of events that shape the lives of people in the middle ages, who lived in a feudal system that was not always just.