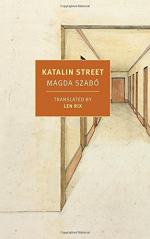 The book begins in media res in the 1950s in Budapest, Hungary. Irén Elekes is a schoolteacher in her thirties. She is married to a man named Pali and has a daughter named Kinga. Due to orders by the Soviet government, they live in a small apartment with Irén’s parents and a former governess named Mrs. Temes. Also with them is Bálint Biró, a childhood friend of Irén’s. Irén’s sister, Blanka, is living on a remote island somewhere south of Hungary.

The novel then shifts to the chronological beginning of the narrative. In the 1930s, the Helds—a Jewish family—move to Katalin Street in Budapest. Their neighbors are the Elekes family and the Biró family. Mr. and Mrs. Held have a young daughter, Henriette, who is close in age to Irén, Blanka, and Bálint. Bálint’s father is referred to only as the Major, as he is a Hungarian military officer. He is apparently a widower. The three families become very close, as if they are one large family.

The narrative then shifts to 1944. Hungary is being invaded by the Nazis. Irén and Bálint plan to marry one another. However, their engagement celebration is interrupted by Major Biró, who says that Mr. and Mrs. Held have been arrested by the Nazis because they are Jewish. Major Biró then hides Henriette in his home. However, not long after, Major Biró is killed in combat. Henriette is discovered and killed by the Nazis.

The novel then shifts ahead several years. In 1949, Bálint is taken prisoner by the Soviet Union, of which Hungary is now a part. He returns to Katalin Street in 1952. Irén wishes to continue their engagement, but Bálint does not wish to do so, as he appears to be too disillusioned about the state of sociopolitical affairs in Hungary. Blanka becomes furious with Bálint for treating Irén that way and she falsely reports him for corruption. The Soviet government then forcibly transfers him to a remote village. However, in 1956, it is discovered that Blanka has made false accusations against multiple people. Bálint is allowed to return to Hungary, and he helps secure passage for Blanka out of the country before she faces heavy repercussions for her actions.

By this time, Irén has been married to an engineer named Pali for multiple years, and they have a young daughter named Kinga. However, upon Bálint’s return, she realizes that she still loves Bálint and that she only married Pali in order to gain a sense of stability and security in her life. Bálint eventually asks Irén to divorce Pali and marry him, and she agrees to do so.