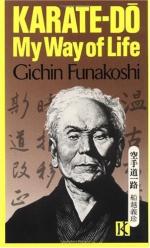 Gichin Funakoshi
This Study Guide consists of approximately 30 pages of chapter summaries, quotes, character analysis, themes, and more - everything you need to sharpen your knowledge of Karate-Do.

Meiji Restoration is the name of a political movement that begins in 1870 in Edo, which is the name of a city in Japan now called Tokyo. The Meiji Restoration is opposed by many traditional Japanese citizens who object to their cultural rules. For example, the Meiji administration requires applicants who sit for the medical school entrance exams to have been born in 1870 or later regardless of their actual age. In addition the Meiji government bans the practice of karate.

Shuri is the name of the capital of Okinawa where Funakoshi is born in 1868. Shuri is located in the Yamakawa-cho district of Okinawa.

Topknot is the name of a hairstyle that is the traditional samurai style. The topknot is forbidden by the Meiji Restoration for anyone who wants to begin a medical career. The Funakoshi family favors the traditional topknot so Gichin goes along with...

More summaries and resources for teaching or studying Karate-Do: My Way of Life.

Karate-Do: My Way of Life from BookRags. (c)2022 BookRags, Inc. All rights reserved.