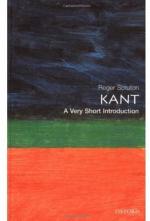 Roger Scruton
This Study Guide consists of approximately 25 pages of chapter summaries, quotes, character analysis, themes, and more - everything you need to sharpen your knowledge of Kant.

This detailed literature summary also contains Topics for Discussion and a Free Quiz on Kant: A Very Short Introduction by Roger Scruton.

Immanuel Kant was born in the Prussian city of Koenigsberg in 1724. Though of humble origins, through some luck and a long career of hard work in academia, Kant's "critical philosophy," which purported to solve all of the problems of metaphysics confronting philosophy, proved to be one of the most influential philosophies of the modern era.

Though Kant was interested in solving all of metaphysics' puzzle, his initial interest was in sorting out the controversy between the Rationalists and Empiricists. The controversy was centered on the question of knowledge: Could one have objective knowledge of the world? If so, how? According to the Rationalists, the most important representative of whom was Gottfried Leibniz, reason and reason alone was capable of providing an understanding the world as it is. The Empiricists, on the other hand, led by philosophers like David Hume, argued for the primacy of experience and more or less dismissed reason—at best, it could analyze what the senses had already provided. Kant found neither of these satisfying and therefore set out to create his own system. In his system, both reason and experience play an important role. He rejected the Rationalist doctrine that one could have perspective-less knowledge; one could not see, so to speak, through God's eyes. His conclusion is that all knowledge comes through the senses, but it must be interpreted by reason. Experience without reason was just meaningless, raw sensation.

Kant was skeptical about the exact nature of the soul, but deduced a few of its faculties, like the faculty of understanding. Another such faculty is practical judgment, the faculty by which a person decides what to do. Practical judgment is the source of an ethical life However, if he is to build an ethical system, he must first establish that humans have free will. He was able to resolve this paradox, at least to his own satisfaction, by falling back on his distinction between the phenomenal and noumenal, the apparent and the real. In the phenomenal world, he argues, humans are like every other object, subject to the unbending laws of causation. However, in the noumenal realm, they are free to do as they please. Since humans are distinguished from the rest of existence by their freedom and since it is what makes an ethical life possible it becomes the foundation for his ethical system. Ethical living is identical to living in accordance with pure practical reason, free from any selfish interests or desires which come not from reason but from the phenomenal world. The fundamental principle of his ethical theory is the categorical imperative which states that one must always act as if one were following some universal law. In other words, one may only do that which he would accept others doing; it is a philosophical reformulation of the Golden Rule.

Kant's metaphysics and ethics are by far the most well-known aspects of his works, but his writings on aesthetics and politics are very informative and relevant. Kant used his transcendental philosophy to understand the seemingly paradoxical nature of beauty. Beauty seems, at once, to be both objective and subjective. This, he explains, is because beauty is the result of a kind of imaginative free play: The understanding is presented with a perception that has no concepts and therefore is "free" to apply whatever concepts it pleases. The judgment makes on the basis of this interpretation are true and valid, but the judgment is subjective insofar as others might apply entirely different concepts to their own perceptions.

Politically, Kant was a classical liberal very much in tune with the spirit of the Enlightenment. Like many of his contemporaries, he opposed democracy—he did not have faith that the average person was capable of making informed decisions—but also distrusted monarchy. He was, instead, an advocate of an ill-defined republicanism. Though he gave no specifics on how his ideal government would function, he was explicit that it must operate as a kind of "virtual" democracy. The passage of a law would not require the explicit consent, or even the implicit consent, of every citizen, but it must be consistent with the principles of practical judgment, namely the categorical imperative.

More summaries and resources for teaching or studying Kant: A Very Short Introduction.