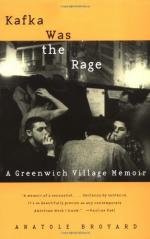 Kafka Was the Rage: A Greenwich Village Memoir Topics for Discussion

Why did Anatole seem so dependent on Sheri? What hold did she have on him? What was the basis of their relationship? What were their true feelings for one another?

How was Anatole able to afford to buy a used bookstore? What did the bookstore mean to him? What was his view of some of his customers? How could his attitude toward some customers be characterized?

What role did literature play in Anatole Broyard's story about his early years in Greenwich Village? How did some of his contemporaries react to the books they read? Why was literature important to Americans after the war?

What authors influenced the behavior of young, upper-class...