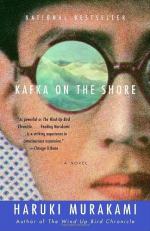 Kafka on the Shore Characters

The identity of the boy named Crow is unclear. The chapter preceding chapter 1 in Kafka on the Shore is titled "A Boy Named Crow" and he is given the first line of the novel. His voice is described as being sluggish, but the reader learns very little else about him. In his self-titled chapter, he appears to be Kafka Tamura's imaginary friend, leading him through a visualization game while the two sit side by side. As the novel progresses, the boy named Crow is sometimes a voice in Kafka's head, Kafka himself (Kafka means crow in Czech), or an actual crow. Sometimes he appears to Kafka; other times Kafka only hears his thoughts. The boy named Crow functions as Kafka's alter ego, giving Kafka advice, cheering him on, and narrating present and future events.

Goma is the one-year-old tortoiseshell cat Nakata is looking for...

Kafka on the Shore from BookRags. (c)2023 BookRags, Inc. All rights reserved.