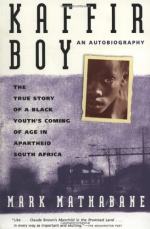 Introduction & Overview of Kaffir Boy: The True Story of a Black Youth's Coming of Age in Apartheid South Africa

Mark Mathabane
This Study Guide consists of approximately 40 pages of chapter summaries, quotes, character analysis, themes, and more - everything you need to sharpen your knowledge of Kaffir Boy.

Mark Mathabane's Kaffir Boy: The True Story of a Black Youth's Coming of Age in Apartheid South Africa was the first widely published South African autobiography written in English by a black native. Macmillan's initial 1986 American publication stunned readers in much the same way Frederick Douglass's 1845 slave narrative had, forcing many to rethink American support of South African business and government. Earlier, Mathabane had begun to publish various essays and articles to educate Americans about the horrors of apartheid. When two of his brothers-in-law were shot and killed at point-blank range by a black police officer, he feared that the murders might have been a retaliation to one of his recently published Newsday articles. He agonized over the harm his political writing might bring to his family who still remained at home in Alexandra, but he knew that ignoring racial intimidation and violence would not make them go away. In his preface, Mathabane explains that Kaffir Boy was his attempt to make the world understand that apartheid had to be abolished because it could not be reformed.

Kaffir is a derogatory name whites use for blacks in South Africa. "The word Kaffir is of Arabic origin. It means 'infidel.' In South Africa it is used disparagingly by most whites to refer to blacks. It is the equivalent of the term nigger. I was called a 'Kaffir' many times," says Mathabane in an explanatory note that precedes the autobiography.

A chance reading of the book by Oprah Winfrey moved her to buy the film rights and arrange a family reunion with Mathabane and his family as guests on her show. Afterwards, his popularity and literary success skyrocketed. Kaffir Boy quickly became a national bestseller, translated into seven languages. Guest appearances on numerous television shows and riveting university lectures soon made Mathabane a sought-after speaker who continued to use words to prick the consciences of his listeners. By the year 2000, he had published four more works of nonfiction. Like Kaffir Boy, they too would address mankind's pressing need to abolish— once and for all—racial injustice, child abuse, spouse abuse, alcoholism, illiteracy, poverty, and disease.

More summaries and resources for teaching or studying Kaffir Boy: The True Story of a Black Youth's Coming of Age in Apartheid South Africa.

Kaffir Boy: The True Story of a Black Youth's Coming of Age in Apartheid South Africa from Gale. ©2005-2006 Thomson Gale, a part of the Thomson Corporation. All rights reserved.